It's the end of working hours. At the Grote Weteringdijk in Oene, one man after another returns with his machine to the contractor and Earthmoving company Riphagen & Zn BV It is a beautiful late summer day and the sun shines over the undulating corn fields in the beautiful area on the border of Gelderland and Overijssel .

With fifteen permanent employees and an extensive machine park, including eleven mobile excavators, two crawler excavators, eleven tractors, balers and everything needed for silage, sowing, chopping and manure processing, Gradus Riphagen (50) and his wife Carola (45) a great company, which was started fifty years ago by grandfather Gradus and father – also Gradus. However, it was not self-evident that Gradus would take over as the third generation. He became a baker. But when he had to give up that job after 12.5 years due to health problems and just then got the opportunity to take over the house from grandfather with the company as the eldest grandchild, he seized the opportunity with both hands. He retrained as a machinist and has never regretted that decision. Together with his father, he continued the family business.

Future
The fact that Riphagen is a fine and reliable company that delivers good quality work is evidenced by the fact that both customers and employees are loyal. The oldest employee, Gé Kluin, is celebrating his 40th anniversary this year; he was still employed when grandfather Gradus was in charge. The students who come to learn the trade at Riphagen as part of the recognized training company also stick around; the oldest has been working there for seventeen years. “We will soon have two more”, says Gradus. “But one of them has to get his tractor driver's license first, otherwise it's of no use to us. And those students, we need them, huh? There is no future without students.”

Family
Almost the entire Riphagen family is involved in the company. Carola has been active as a planner and in the administration from the start. “And besides that, I'm a jack of all trades; I pick up and take the boys to the job sites, pick up parts and do whatever needs to be done,” she laughs. The children Gerco (20) and Marije (18) are also part of the family. Gerco also works at the company.

Wage and Earthmoving company Riphagen & Zn BV
In 1969 Gradus Riphagen and his son started a contracting company on the Grote Weteringdijk in Oene. In the first years he mainly carried out small-scale agricultural work: collecting milk cans from the farmers in the neighborhood and helping with the harvest. The first wheeled excavator was used to mow ditches and to cover silage or grass with soil. And now a third-generation Gradus Riphagen has been in charge of the company, which is also a recognized training company, for more than twenty years. Although much agricultural work is still done, earthmoving has become the main activity of the company. Because while agricultural work is seasonal (in the region it mainly concerns grass, maize and grain), earthwork is an activity that continues all year round. Riphagen's field of activity covers the city triangle Apeldoorn - Deventer -Zwolle, but also beyond, if the customer so requests.

Perfect for small work
Two Doosan excavators are part of Riphagen's machinery. The first is a mobile Doosan DX55 excavator from 2012. “We bought it on a gamble at the then Doosan dealer in Laren. We spend a lot of time on cycle paths and that little crane on wheels is perfect for that job,” says Gradus. “We still like him very much.”

Another Doosan
At the beginning of September, the machine park was expanded with a brand new Doosan DX140W-5 mobile excavator. It is the replacement for an older DX140W, which Gradus bought used a year and a half ago. “We had the opportunity to buy that machine from a machinist, a self-employed person, who was retiring. In addition to the machine, we also got the work at BAM.” Because the machine had been running for many hours, Gradus decided to exchange the DX140W for a new model of the same type. “I asked our driver what he wanted – We don't automatically choose Doosan – and he was eager to get another Doosan.” Contact with Cor Verbeek van Staad was quickly established. “Cor sometimes came by to ask if he could do something for us. So we got into a conversation and the result was delivered last week. That first meeting went well!"

Complete
The new excavator is a standard machine equipped with an engcon tiltrotator for extra flexibility and additional LED lighting. “It is a complete machine with everything on it and on it”, says Gradus. “No further extra options are necessary.” The new DX140W-5 was immediately deployed on a short-term asphalt maintenance project of the municipality of Epe. This involves making road narrows to reduce the speed of road users, whereby the old asphalt has to be removed and excavated. “The operator has been working with the excavator for two days and he is very satisfied with it,” says Gradus. He adds that the machine will not be in the shed for the time being, because as soon as the asphalt maintenance project is finished, the machine will move on to a project that requires the construction of a pressure sewer.

economical
In addition to reliability and safety, costs are important to Gradus. “At the end of 2018, we bought a machine from another brand that is comparable to the new Doosan. We know that the other machine is economical; from the Doosan we are now going to find out. So now we are really going to discover which machine has better fuel consumption and lower costs.” Emission standards are also important. “Clients ask for it, so we want machines that meet the emission standard. We meet that demand with our Doosan.” As usual with new machines, Staad does the 250, 500 and 1000 hour turn. Riphagen will then do the maintenance himself. “As long as no laptop is involved, we can do the maintenance ourselves. And if that doesn't work, we'll call Staad over." Soon the Doosan, like all other company machines, will also be stickered with the company name. “We would have loved to have that ready for the photo, but unfortunately that didn't work out.” 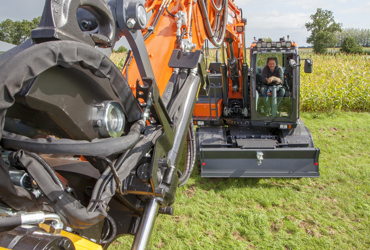