Doosan Infracore Europe is proud to announce that its crawler excavators have won an award! For the third consecutive year, the Doosan DX300LC-5 has the LCO ( Lowest Cost of Ownership) - Award won. The Doosan DX180LC-5 has won the HRV ( Highest Retained Value ) Award. Both awards are presented by EquipmentWatch.

EuipmentWatch is a world leader in providing data, software and insights for heavier construction equipment. Based on empirical data, they distinguish differences in maintenance costs between heavy and compact equipment. In the LCO Awards, EquipmentWatch looks at the nominee for the lowest maintenance costs over a five-year period. In the HRV Award, EquipmentWatch looks at the machines that retain the highest expected percentage of their original value, including within a five-year period.

Gilles Bendaoud, Vice President Sales & Marketing at Doosan Infracore Europe, commented on the award: “Total maintenance costs and machine value retention are probably the most important aspects buyers consider when purchasing new equipment. The Doosan DX180LC-5 and Doosan DX300LC-5 awards show why our equipment is always highly regarded for great performance. You literally get value for money. It just goes to show why we are one of the best construction equipment manufacturers in the world.”

Like all Doosan crawler excavators, the Doosan DX180LC-5 and Doosan DX300LC-5 have innovative and exclusive features that lead to huge reductions in fuel consumption. Think about 10% on average compared to previous generation machines.

One of these exclusive features is the 'Trip Meter Setting' screen, which allows operators to monitor fuel consumption daily (or for a desired period of time) directly from the control panel. The automatic shifting provides an automated shutdown of the engine, after a preset time or when the machine has been idling for a specified amount of time (3 to 60 minutes configurable by the operator). This also contributes to fuel economy. Doosan has developed a special system for this: SPC (Smart Power Control). This system optimizes the balance between the pump power and the diesel engine.

Low total maintenance costs
To further maximize durability and reduce noise, all Doosan LC-5 excavators are equipped with EM (Enhanced Macro-surface) bushings, which are also much more effective than regular bushings when greased.

Air pre-cleaners are fitted as standard to blow dust, dirt, insects, rain and snow out of the air intake. This sends cleaner air to the engine air filter. This extends service intervals for air purifiers, improving uptime and productivity.

The cabin air filter has also been protected and the air conditioning filters in the cabin have been redesigned for easy replacement. The oil bath (9.5 L) pre-cleaner is recommended for dusty environments (such as quarry applications) and is optionally available to remove dust from the air intake. This considerably extends the maintenance intervals of the air purifier.

An audible alarm has been added to prevent permanent engine damage. This gives the driver the message: 'water in fuel'. If the operator ignores the signal after several warnings, the motor and pump are automatically reduced. To make it easier for operators to understand the importance of warnings and to communicate the correct warning codes, pop-up menus appear in the display. These contain detailed information so that the warnings are easier to spot. 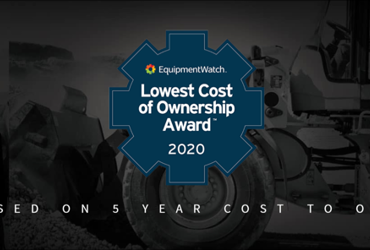 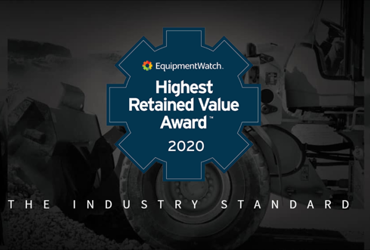