After 26 years, Doosan is the first international company in the Chinese market to set a new record. Annual and quarterly sales are up 21% and 55% respectively. Doosan aims to further increase its market share by tailoring products and services even more closely to the market.

In China, Doosan has now produced more than 200,000 excavators. This makes them the first international company in China to achieve this.

Doosan Infracore has announced that its Chinese subsidiary, DICC (Doosan Infracore China Corporation CO., Ltd.) based in Yantai, China, has produced its 200,000th excavator. The company achieved this record some 26 years after establishing itself in China for the first time since October 1994.

To celebrate this milestone, Doosan Infracore invited its employees, dealers and customers to the Yantai factory for a ceremony to celebrate the production of the 200.00th excavator in China. The event was broadcast live online and the 200,000th excavator was handed over to the customer.

Doosan Infracore completed construction of the Yantai plant in 1996. The rapid growth of the Chinese market in 2001 reached a production of 5,000 excavators, making Doosan Infracore the market leader in China. They beat the Japanese manufacturers that were the market leaders at the time. Doosan reached the next record of 10,000 excavators in mid-2000 and ten years later, in 2010 with a production of around 20,000 machines.

First manufacturer with 200,000 units
Doosan Infracore is the first active MNC (Multinational Corporation) company in China to reach the impressive production figure of 200,000 units. With this, Doosan further strengthened its market position in China for excavators and increased its market share from 12.9% in 2015 to 22.8% in the third quarter of 2020. The Chinese excavator market registered the largest annual figures ever with 200,000 units in 2019. At the start of last year's COVID-19 crisis, the market shrank slightly, thankfully this was short-lived. After two months, another recovery was seen, which has continued to this day.

The market has hit a new all-time high in 2020, growing to 275,000 units per year of what is generally produced in China for excavators. In 2019, Doosan Infracore sold more than 15,000 units in the Chinese market, while total sales reached 14,348 units as of the end of the third quarter of last year. This is an increase of 21% compared to the same period in 2019. In addition, Doosan Infracore China recorded sales of KRW 308.9 billion in the third quarter of 2020, an increase of 55% compared to the same period last year. .

In line with the growth of the Chinese excavator market, Doosan Infracore continues to introduce new products and work tools adapted to the requirements of Chinese customers. For example, in July 2020, the company launched a new 6-ton wheeled excavator (Doosan DX57-7), as well as an improved service campaign to take customer satisfaction to an even higher level. In addition, Doosan Infracore China provides service training to more than 7300 technicians, so that the technicians of all dealers can continue to work at the same service level.

Following the growth of the corporate market in China, Doosan Infracore has increased its contribution to corporate social responsibility by supporting local communities. Since 2001 they participate in 'Project Hope'. That is one of the charities that offers support to young people who cannot go to school, but it gives them an opportunity to receive education and thus improve the underdeveloped areas in China. At present, there are 37 Doosan Hope primary schools in China. Doosan Infracore also offered various forms of education for other schools in the second half of 2020. In recognition of Doosan's contribution to Project Hopes, Doosan Infracore has won both the China Youth Development Foundation's Out Standing Contrubition award and the Exemplary Korean CSR Companies China Award for three consecutive years.

One of the directors of Doosan Infracore says, ''Doosan Infracore China has grown into a major player in 26 years. By setting the record of 200,000 units, we contribute to a great performance and what we have achieved as a team. To maintain the satisfaction of our customers, we continue to work on improvements and new products.” 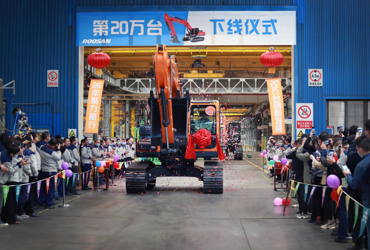