Doosan Infracore has launched XiteCloud in South Korea. This is a new smart construction technology: an integrated control system with which machines can be controlled unmanned and automated. XiteCloud is the first step towards the commercialization of Concept-X, which Doosan first showed to the world in 2019.

XiteCloud maximizes productivity by incorporating complex 3D drone construction surveys and groundwork calculations into one cloud platform. This allows them to be completed in just one to two days. After its successful introduction in South Korea, Doosan Infracore plans to launch XiteCloud in international markets, including Europe, in the near future.

This technology opens the door for Doosan Infracore to further expand its construction site management business portfolio. This is in addition to its existing activities in the production and sale of construction machinery.

Increased productivity
With XiteCloud, a contractor can manage multiple tasks at once, such as surveying, site analysis, machine operation, and construction management, on a single platform. This reduces construction costs, saves time and increases work accuracy. Ultimately, this is reflected in productivity.

The XiteCloud technology even makes it possible to digitize information about earthwork sites in three dimensions and to analyze rock formations. Being cloud-based, XiteCloud makes it easy for stakeholders to join forces and manage the progress of any given project together.

XiteCloud has already gone through the technology verification process at more than ten construction sites, such as large-scale apartment complexes and infrastructure facilities in Korea, among others.

At an urban redevelopment site in a metropolitan area, the XiteCloud platform analyzed and calculated the work volume of rock formations that were not discovered until after the project had started. This meant that the client and the contractor were able to reach agreement on the adjustment of the construction period. In addition, the visualized 3D data allowed them to gain more insight into additional construction costs resulting from the extension of the construction period.

XiteCloud was also applied to a pilot project in Peru, South America. This pilot project was designed in anticipation of the development of a large-scale mine in the country. The customer was very satisfied with the service, especially the regular drone surveys and the refined results of the construction management. The director said, "XiteCloud provides a comprehensive project progress management service. This enhances trust between client and contractor."

Doosan Infracore plans to expand the applicability of XiteCloud to large-scale construction equipment by adopting 5G mobile technology and telematics. After successfully launching XiteCloud in the domestic market, Doosan Infracore will soon start the overseas launch.

In November 2019, Doosan Infracore held a Concept-X demonstration at the performance test site in Boryeong, Korea. This was an introduction to the 'construction site of the future', which Doosan says will mainly consist of many of these advanced, unmanned and automated technologies.

“Concept-X is a comprehensive control solution encompassing the entire construction process, including drone-based surveys, automatic topographical data analysis, construction planning and unmanned construction equipment,” said a director of Doosan Infracore. “We will be launching several steps in phases before Concept-X is fully marketed. The launch of XiteCloud is the very first step towards that goal.” 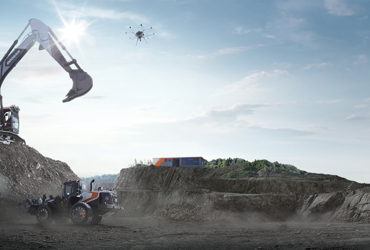