The Porsche Mobil 1 Supercup is the only major competition that has been providing exclusive support for 30 years to Formula 1 races on the highly regarded circuits for the eight European stages of the F1 championship. They also have a significant share in the spectacular Grand Prix weekends.

The team sponsored by Doosan is the Emilian Dinamic Motorsport team. The only team with two Italian drivers. Doosan sponsors the team in the first two races, in Monte Carlo and Le Castellet (France). These races will take place on May 23 and June 27, 2021. In addition, Doosan will also sponsor the last two races in Zandvoort on September 5 and the grand final at Monza National Circuit in Italy on September 12.

One of the Italian drivers of the Dinamiac Motorsport team is Lodovico Laurini. A skilled and determined driver of 23 years old and from Parma. Lodovico Laurini has been passionate about motorcycles since his childhood. He started go-kart racing when he was 11 years old and entered Formula 3 at 19 years old.

Lodovico Laurini is not only a promising talent but he is also involved in the family business Laurini Officine Meccaniche, a Parma-based company specializing in the design and manufacture of excavators and pipeline equipment for international projects. Lodovico is responsible for quality control and he supports his father, Marco Laurini, in the management and development of the company.

Sponsorship shows a strong relationship between the companies
Marco Buratti, Doosan's regional sales leader for the Benelux, France and Southern Europe said: ''We chose to sponsor the Porsche Mobil 1 Supercup because we encourage a young, talented driver to compete in the 2021 championship. winning is a good idea.”

“We have a very good relationship with Laurini Officine Meccaniche. In 2018, Doosan chose to settle in Italy. In collaboration with the company, the production of our new series of demolition machines for the European market was realized here. A project that already yielded important results and great satisfaction between the two companies after two years.

Sponsoring Lodovico Laurini's Dinamic Motorsport team strengthens the good relationship between Doosan and Laurini Officine Meccaniche. In 2018, Lodovico moved to America to pursue his championship dream. He has participated for several years in the Porsche Carrera Cup Italia, where his successes in this international competition have allowed him to compete with the best in the world and to participate in the 2021 edition of the European Porsche Mobil 1 Supercup competition .

“I am honored to have achieved this important goal and to race in the prestigious Porsche Mobil 1 Supercup International Championship,” said Lodovico Laurini. He continues: ''My motivation and enthusiasm has doubled since I know that I can drive for a big brand like Doosan. A company that I have been strongly attached to for more than three years and like to associate with the family business and my passion.”

The Supercup championship is organized by Porsche AG. To ensure that each driver has an equal chance of winning, each team competes in the Porsche 911 GT3 model. Equipped with a 485 HP engine and technically identical. Tires and fuel are all the same. This ensures that all races are very close together and very exciting. It is thanks to this mix of common factors that the best racers can distinguish themselves and show their talent. 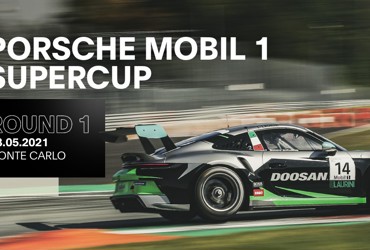