The state-of-the-art cab of the new -7 models excels in ergonomics, enhancing operator comfort and ease of operation. In addition to a new, high-quality seat, the upgraded cab offers more features as standard than other machines on the market. This ensures excellent controllability and high precision in all applications.

The New Operator Assistant Features
The Doosan DX140W-7 and the Doosan DX160W 7- wheel excavators are standard in the new automatic excavation interrupt function which is the auto-service brake in position, holds when the vehicle is at a standstill, without that the driver need to pedal in the brake pedal. The operator can enable or disable this feature by pressing the appropriate button. When the accelerator pedal is subsequently pressed, the function is released again. Joystick control is also a new option that allows the operator to control the machine using the joystick thumbwheel, without the operator having to use the handlebars while operating and driving in work mode. This function only works below the speed of 20 km/h in first or second gear. The function is activated or deactivated by pressing the thumbwheel steering wheel button on the control panel for at least one second. Last in this category, the Load Isolation System (LIS) is a new option that improves operator ride comfort by reducing impact transmitted to the front of the machine when driving off-road on uneven or rough terrain. The LIS function is also activated by pressing the appropriate button on the control panel. It can be activated when the speed is between 5 km/h and 0.5 km/h and can be deactivated between the speeds of 4 km/h and 0.5 km/h.

New tiltrotator mode
There is a new tiltrotator mode on the wheeled excavator control panel, which can be selected to ensure optimized hydraulic flow and helps maximize the accuracy of tiltrotator operation by eliminating back pressure. This new mode is a special two-way flow mode, but is managed by the EPOS as a one-way flow mode, with direct return to the tank in either direction. This prevents back pressure and increases flow and controllability. The cabin of the DX140W-7 and DX160W-7 is equipped with a luxury steering wheel with chrome spokes and logo. The new design improves operator visibility. The steering column also features a new design with an 80mm telescoping function that allows the operator to move the handlebars closer to them to find their optimal position. In addition, there is also a tilt lever that allows a 15 degree tilt towards the operator to increase the view over the top of the handlebars, for example when digging trenches. The narrower design of the steering column therefore contributes greatly to better visibility.

Other key new features in and around the cab include:

Enhanced tool carrier capabilities
The Doosan DX140W-7 and the Doosan DX160W-7 provide an improved front motion for rotating tools. As a result, the working range is also improved. In addition, the stroke of the kink arm cylinder has been increased while the location of the cylinder remains the same. A sluice valve has now been added on top of the boom cylinder, to prevent the articulated arm cylinder from being released unexpectedly when digging. From now on, the Doosan DX140W-7 comes standard with a heavier 2.5 tonne counterweight, for both the mono boom and other boom configurations. The Doosan DX160W-7 is also equipped with a 2.5-ton counterweight as standard, but it also has a 3-ton counterweight as an option. This contributes to a higher lifting and digging capacity. To accommodate the heavier counterweights, the Doosan DX140W-7 is equipped with heavier ZF3060 axles, which are also used on the Doosan DX160W-7. With the DX140W-7, this provides a 30% higher maximum load. Compared to the standard chassis in the Doosan DX140W-7, the Doosan DX160W-7 has a heavy duty chassis. Both the Doosan DX140W-7 and Doosan DX160W-7 have new upper structures that provide the space and durability for the new standard and optional heavier counterweights. By using bolt-on mounting, there is greater overhang on the rear/front undercarriage, providing even better stability. The wheeled excavators have a new lifting eye as standard, which is part of the casting for the push position and for the bucket attachment at the end of the arm. The new lifting eye has a maximum capacity of five tons and has a special sleeve insert to prevent deformation of the lifting hole. To complement the increased stability of the wheeled excavators, they have a new smart hydraulic system that offers an improvement of approximately 30% in attachments. The new system optimizes hydraulic flow distribution when both arm and attachment are operating simultaneously, with a new priority valve and auxiliary hydraulic line that maintains continuous hydraulic flow to the attachment even when the boom is in use.

New Stage V engine
To meet Stage V engine emissions regulations, the new Doosan DX140W-7 and Doosan DX160W-7 wheeled excavators are powered by the latest generation Doosan diesel engine, the DL06, delivering 102 kW (137 hp) at 2000 rpm. The DL06 engine offers a new solution to exceed Stage V regulations without exhaust gas recirculation (EGR), which increases the amount of air available during combustion, increases the temperature of the process and significantly reduces the amount of particulate produced. This is combined with super efficient DOC/DPF+SCR post wallpaper division technology to ensure minimal emissions. Thanks to the new technology, the maintenance of the diesel particulate filter (DPF) is significantly reduced, with no maintenance required until the machine has run for 8000 hours.

SPC3 Smart Power Controllers
On the new Doosan wheeled excavators, the improved fuel economy of the DL06 engine combined with a new main hydraulic valve and the new generation of SPC3 smart flow controllers provide greater fuel economy compared to the previous generation. Four power modes are now available to help make the new wheeled excavators easier for the operator to control. The operator can set the power mode (P+, P, S, or E) in either one-way or two-way mode. When driving the wheeled excavators, the operator can select the two-pump drive mode via the touch controls on the main panel. This reduces the speed by approximately 300 rpm when engaged, resulting in a 10% reduction in fuel consumption while driving. The acceleration function has also been improved so that the operator feels a faster response when depressing the accelerator pedal. When the two-pump stroke is turned off, it provides more torque for better uphill riding, but in general using the two-pump one-stroke is recommended as long as the slope isn't too extreme.

DoosanCONNECT Telematics System
The new wheeled excavators are factory installed as standard with the state-of-the-art DoosanCONNECT telematics system. The system provides a web-based solution to manage the fleet, which is very useful in continuing to monitor the machines properly. But also to have the machines maintained on time. It is available as standard on all new Doosan 14 tonne excavators and above, all new Doosan wheel loaders and dumpers. 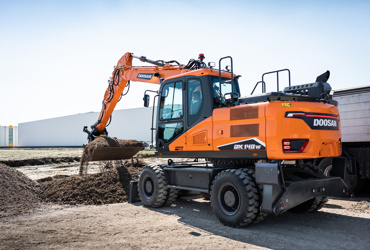 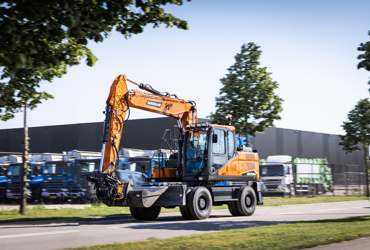 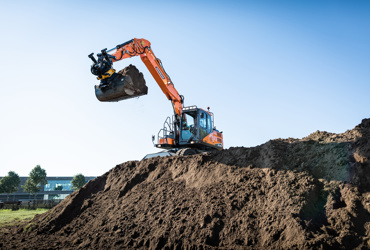 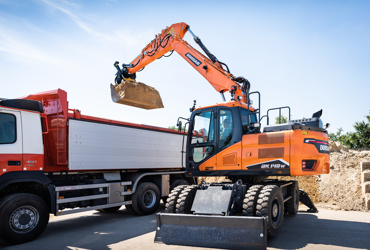 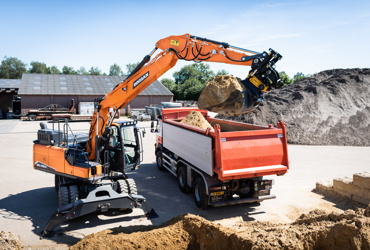 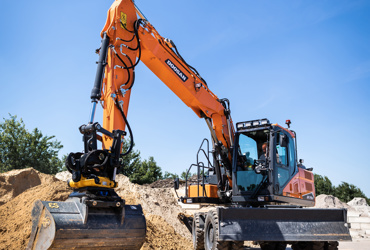 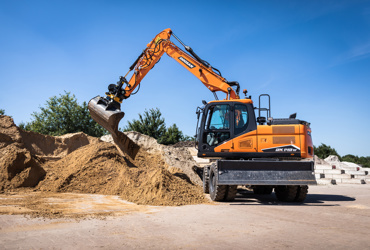 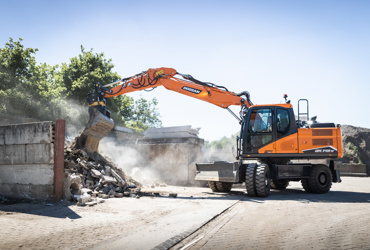 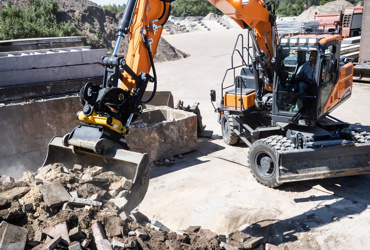 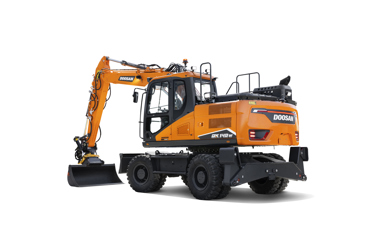