The first system with a transparent body of the Doosan wheel loaders has won two important prizes at the Matexpo, which took place from 8 to 12 September 2021 in Kortrijk.

The system won an award in both the innovation and safety categories, winning two of the three awards that could be awarded at the Matexpo. The prizes were awarded by an independent jury consisting of specialists from the sector, led by jury chairman Danny van Parys. This year 51 applications for the awards were submitted (22 for the innovation prize, 12 for the safety prize and 17 for the Green prize).

Matexpo is a biennial international trade fair where machines and equipment for the construction, industrial and environmental sectors are displayed. It is the third largest trade fair in the industry in Europe, with a good reputation. The fair attracts on average more than 40,000 visitors.

Using innovation to increase safety
The Doosan Clear Bucket has a fully integrated system that allows the wheel loader operator to see the blind spots of the bucket on the screen inside the machine. The system captures images from the front of the wheel loader using two cameras mounted on the top and bottom of the machine. Together, these display a combined image in real time.

Due to the blind spots caused by the wheel loader bucket, the area in front of the machine is considered a hazardous area. The new Doosan transparent bucket function makes it easy for the operator to see everything clearly. This increases safety and prevents accidents. Another benefit is that work efficiency can be greatly improved by providing the operator with a foresighted perspective while loading, unloading or transporting materials.

Doosan has already developed several advanced safety systems for different machines. For example, the Around View Monitor (AVM) – a system that can monitor the environment of the machine and a rear warning system with ultra-sensors, both of which have been well-received in the industry. A spokesman for Doosan comments: ''Since the safety standards for the construction site and the machines are becoming higher and higher, safety systems will soon become indispensable. We plan to continue developing more safety features that can protect the operator and other workers. We want to be at the forefront of creating a safer construction site. 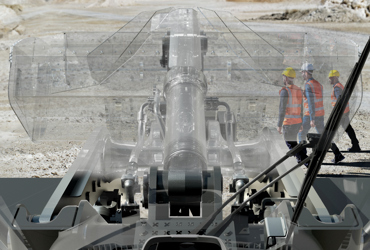 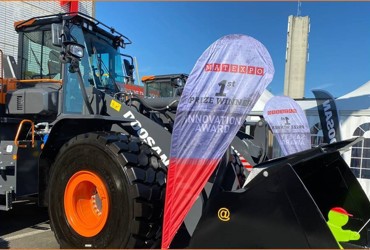