A new machine that replaces the work of two temporary workers, that doesn't sound like nothing. Paul van Lent, owner of De Kroon Flowers, saw it happen with his own eyes. Paul: “I often worked with a flexible workforce of temporary workers, especially towards the end of the year. That will no longer be necessary this year.”

De Kroon Flowers is located in Milsbeek, but the company operates throughout the Netherlands. Even across the border in Germany. “Yeah, gosh, where not? We're all over the place! Myself and my wife Wilma work in the business, together with our two sons and a lady who arranges our flowers. We are a great team and things are going well.” De Kroon Flowers has officially existed since 1983 when Paul started his sole proprietorship. From 1990 the organization continued as a VOF and they are engaged in numerous works. You can go there for landscaping, maintenance, but the company is also a tree nursery, garden center, market hands and wholesaler.

Automation
Paul talks about his DX35Z. “The machine was mainly purchased to clear trees. We wanted to take steps towards automating our work. Working with the shovel? Haha, that's out of the question these days, isn't it? Do we get tired of it. No, of course that's nonsense, but we want to make it our own to take a closer look at our work."

Clearing is not the only thing that Paul wants to do with his machine. Paul: “We also want to make a drill on our machine, so that we can also drill holes in the ground and plant our trees. This is also work that we used to do with the shovel.”

Christmas trees
This time of year, De Kroon Flowers is fully engaged in its Christmas tree nursery. “Last year we spent a lot of money on temporary workers, so that we could finish everything around our Christmas trees on time and everyone could have a nice day. We got the feeling that we wanted and could spend these costs differently. Our DX35Z emerged from that. I am convinced that the machine will pay for itself within two years!”

The DX35Z from De Kroon Flowers is like the new model, equipped as standard with two hydraulic double-acting proportional functions, hose rupture valves on the lifting and arm cylinder, 'floating' dozer blade for leveling, 2 x 2 work lights on the cabin and main boom, radio with bluetooth, air conditioning and a spacious cabin. In addition, De Kroon Flowers has added a Damcon root ball cutter, which allows trees to be harvested in one operation. The machine is therefore fully equipped for this. In addition, the DX35Z from Kroon Flowers is equipped with an extra work lamp that shines on the box, for visibility in the dark. 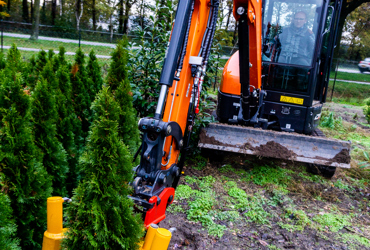 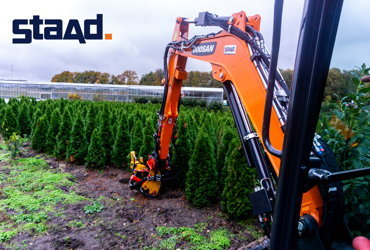 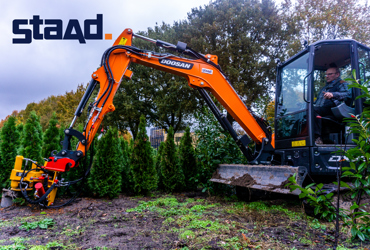 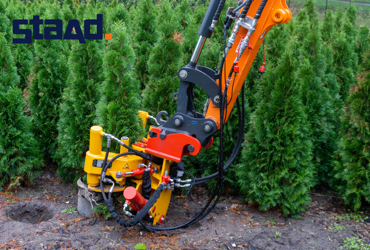 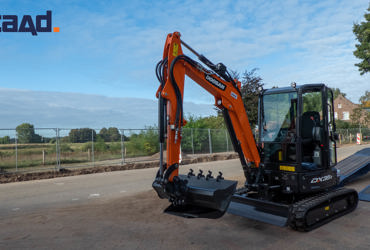 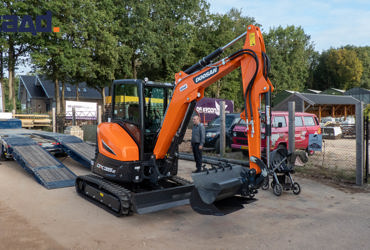