We visit J. Veldhuizen BV from Westbroek, municipality of de Bilt. Last weekend, driver Stijn worked on the prototype Doosan DX165W Electric mobile excavator. But we also talk to Jaap Veldhuizen, owner of the company, about the future of sustainability and what that means for him.

History
''My grandfather used to be a farmer and my father started an agricultural contracting company in 1956. He has always done this successfully and around 1970 he also started doing earthmoving work for large contractors such as Mourik and KWS. When I was 18 years old I started working for my father in the company. In 1994 we entered into a partnership and in 1999 I became the owner. That was a logical step for me, my father was now 68 years old and retired. My son Jordi is now also in the company and he will eventually take over the company from me. That way it stays nice in the family,” says Jaap.

Durability
For Jaap, sustainability is a new vision in which he and Jordi want to lead the way. ''We dare to take on the adventure of making our company more sustainable. This is not nothing and we are very aware of that. It requires significant investments and the courage to take a leap of faith together with partners. But we believe that this is the path we should take. We have already taken the first steps. A bus, shovel, band saw, rammer and vibrating plate are already electric, so that we can carry out the street works that we provide completely electrically. In addition, we are busy filling all the roofs of our business premises with solar panels so that we can also charge all our equipment green immediately. The only thing missing is an electric excavator. So that we can offer the complete package soon.”

Awareness
''We now have one job where we use our electrical equipment. That is not yet enough to earn it back in full, but awareness among municipalities and governments should increase in this way. In addition, not only with governments, but also with the large contractors. We see changes in the laws and regulations imposed by the ministry, but the real big steps are not yet taken on the construction site. The projects are registered sustainably but still carried out with diesel because it is simply cheaper and you do not get the hourly rate that you need for zero emissions. This is a point that does bother me because you stick your neck out to make your machine park emission-free. Enforcement and knowledge at municipalities must be achieved so that everyone also does what they promise when registering a project."

test run
Last weekends, operator Stijn worked on the Doosan DX165W Electric mobile excavator prototype. “Normally I run on a different brand of excavator that I really like, but when Jaap indicated that emission-free is the future of the company, I wanted to give the Doosan DX165W Electric a chance. I really have to say; I don't like it at all ! Electric is not something I would personally choose right away, but it works really well. There are still some points for improvement here and there, but it is not a prototype for nothing. For example, something I think about what could be better is the sound in the cabin. If they would insulate the pump that is now making noise a little better, it would become an excavator that makes almost no noise anymore. In addition, charging is also something that we as a company have to think carefully about, so that it is logistically feasible. That I can easily charge it at the end of the day at the office. But my first contact with electric is super positive. I look forward to more, says Stijn.”

DKTIA
It will take some time, but Jaap hopes to add an electric mobile excavator to the machine park by the end of this year. '' Together with other parties we have submitted a proposal for the purchase of a Doosan DX165W Electric with a consortium in the DKTI subsidy scheme of the Netherlands Enterprise Agency - RVO . When we receive this subsidy, this machine will be further developed within the DKTI project."

''With this we are taking the first step towards CO2-neutral working, especially in inner-city areas. The Doosan Infracore DX165W Electric is therefore still under development. We spent a few weekends on a project of the KWS with the prototype to test the machine for the first hours of practice. The tests were positive and will need some optimization before they can be taken into production. '' 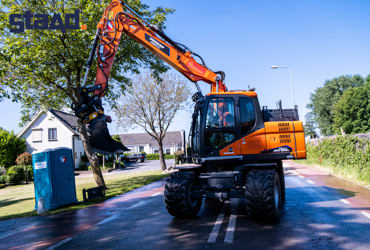 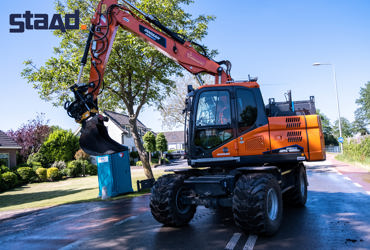 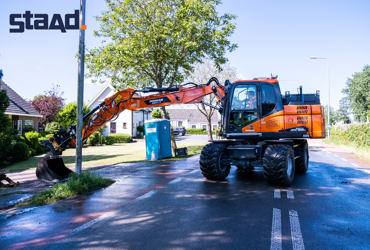 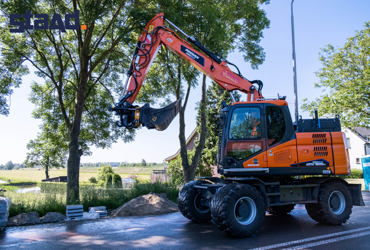 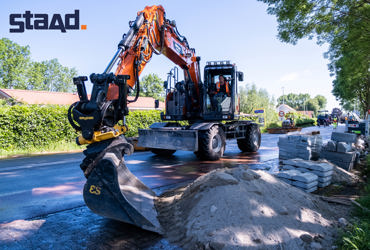 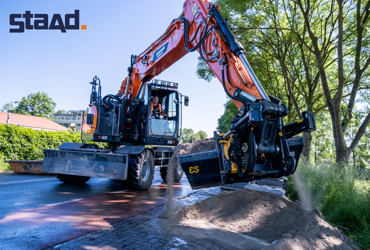 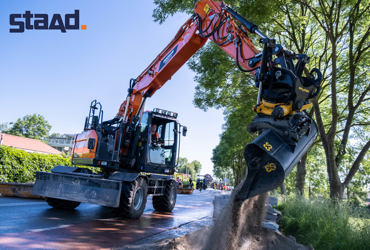 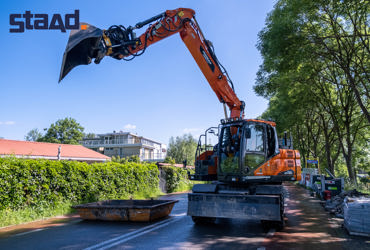 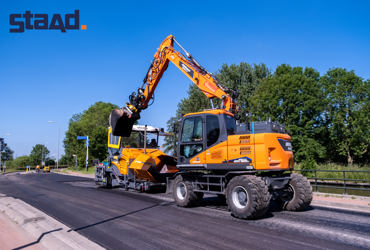 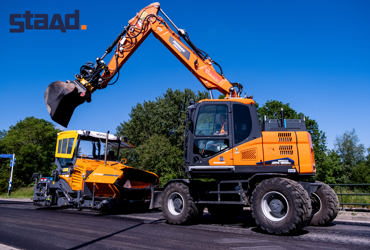