From environmentally conscious livestock farming to a complete contracting and earth-moving company: Grooten VOF is at home in all markets. All this wide-ranging work naturally includes modern machinery, which includes the Doosan DX235LC-5 crawler excavator . We speak with owners Ruben and Joost Grooten.

History
In the southeast of Limburg, the brothers Ruben and Joost Grooten run the company with great passion, which was founded in 1977 by their father Leo. Before that, he had worked as a surveyor for several years, but was eager to take matters into his own hands. He started his own earthmoving company with a tractor and dumper. The work, workshop and machines are gradually expanded.

second generation
In 1998, Joost started working for Grooten VOF , followed a little later by Ruben. The brothers cannot be beaten and in 2017 they become the official owners. It is not so easy for father Leo to let go of the company. He still plays a role, in the background. Mother Isabelle has fulfilled an administrative role from the start. She is now assisted by daughter Marie Ange. Grooten VOF has a total of six permanent employees. “At a busy time, another three freelancers are added,” says Ruben.

Reliable machine
It is striking that at Grooten VOF , in that small club, they are almost all related to each other. Even in the cab of the Doosan DX140W-3 wheeled excavator: Cousin Roger is the regular operator. Since 2016, he has almost 9250 hours on it. According to him, the machine hardly stands still. Still, he has "not experienced much exciting yet" when it comes to repairs. "But of course that's only positive," said Roger.

Spacious work
Grooten's clients include government authorities, contractors and private individuals. The company's activities are therefore broad: think of excavation work, but also the execution of complete earthwork projects. Grooten also carries out contract work for agricultural companies in the area. At the location where we are going, work is being done on a large sewerage work. The new Doosan DX235LC-5 crawler excavator is used here, which is driven by operator Patrick who has been working at Grooten for 45 years. The crawler excavator is very strong, says Patrick, ''the crawler excavator picks sewer pipes of no less than 5000 kilos each, but also wells of 9000 kilos each, which works very well for me''. In addition, Ruben is pleased with the lifting capacity of the Doosan DX140W-3 , which, according to him, is greater than with his previous machines.

Equipment machine
The Doosan DX235LC-5 crawler excavator is equipped with a detachable Engcon tiltrotator, a Freshfilter Tube overpressure system and Groeneveld automatic grease lubrication. The machine is also equipped with a GPS from Trimble Earthworks. Nowadays you really can't do without it, according to Grooten's men. In addition, they find the service of the dealer very important. They find the service provided by dealer Staad very personal. That's why they switched to Doosan a few years ago. “We are not a number. We just clicked right away'', says Ruben.

Machines can be used twice
At the contracting and earthmoving company Grooten, there is a special combination: in addition to performing contract work, they also keep five hundred bulls. ''We can therefore also use the machines for that purpose,'' says Ruben. ''For example for the maintenance of the stable, but also for the production of maize, roughage and straw.'' They also offer these agricultural products on the market.

Quality mark 'Better Life'
Within the company, Joost is mainly concerned with 'environmentally conscious farming'. The livestock farm only keeps bulls that meet the 2-star quality mark of 'Beter Leven'. ''You have to distinguish yourself within that sector'', says Joost. For example, the feed for the animals around the farm is produced and new stables have recently been put into use. These should contribute to a pleasant life for the animals. In addition, Joost would like to see the livestock sector grow in the coming years.

Ambition
Joost hopes to maintain stability in all three sports in the future. Contract work, earthmoving and livestock farming. ''That we continue to have enough work for our staff and the machines, to be able to work in a pleasant, stable manner. In this way we create peace of mind in the company and we can deliver good quality.”

third generation
After the second generation, the third generation of the family is now also thinking about taking over the company in the future. The sons of Joost and Ruben are already eager to take over the baton. They're still young, but it's there. In any case, it doesn't look like they're going to do something completely different," Joost concludes. 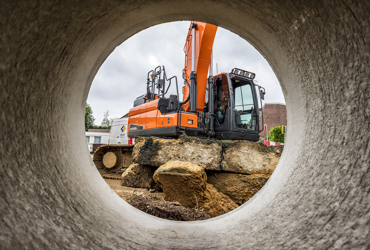 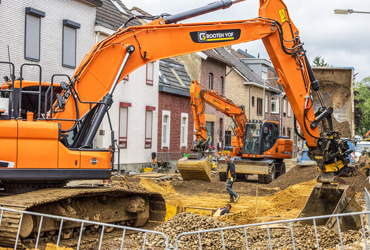 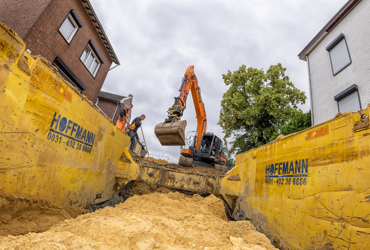