From October 12, 2018, the gas pump will look slightly different. No, after wireless charging we will not refuel wirelessly. What will change is the name of the fuels. Diesel and petrol disappear and make way for a combination of a letter and number.

Why are the names of the fuels actually changed? The European Union has decided that it is easy for its citizens to use the same name in every country. When you are on holiday in Italy or the Czech Republic, there can often be confusion about which snake is the right one. The new names solve this problem.

The idea behind the new name and shapes is simple and unambiguous. The stickers all get the same color, namely white stickers with black letters. The first differentiation that is made is the shape. There will be a round label for petrol, a square label for diesel and a diamond for LPG. The next thing to distinguish is the letter and number code. Petrol 98 becomes E5, petrol 95 becomes E10, diesel becomes B7 and LPG remains unchanged.

The transition of the old and new names is a gradual process. In the near future, both names will be used on both the pump and the fuel gun. If you are refueling on Monday morning with a slightly sleepy head, not much can go wrong. For excavators, this means that B7, the successor to diesel, must be refueled from 12 October.

From 12 October it will therefore be necessary to pay attention at the pump. 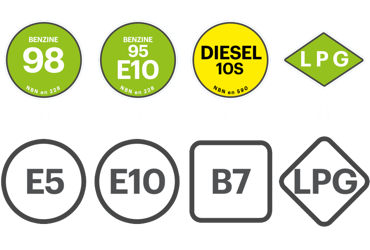