'No' is not an option at Biemond & Zonen

It is a bleak autumn day when we visit Biemond & Zonen Machineverhuur in Zwijndrecht. It drizzles and the heady wind creates a waterfall of leaves that blow over the terrain. The bright orange commercial vehicles and machines that are parked outside nevertheless add a cheerful touch to a gloomy day.

Inside we meet son Jelle (22) and father Wim Biemond (56), the driving forces behind the company. They tell about their company, where some Doosans have recently been offered for rent. Jelle tells that his grandfather and great-uncle Arie van Pelt started the company with one tractor. They were mainly active locally, helping farmers harvest potatoes and beets and dig ditches. Street work was soon added, maintenance work, laying concrete slabs and work on the track. Wim adds: “Father ran the machines and Uncle Arie tinkered. But the company grew well and staff were hired. “The men from Biemond and Van Pelt could be found on the Delta Works, the Afsluitdijk, the Eemshaven and the Zeeland Works. We were all over the country, but that is not surprising when you consider that there were only a few companies with excavators and polyp squeezers. We started with a dump tractor with a crane on it and later we got agricultural tractors with a crane on the back. Very different from the machines we have now.”

into the underworld
Wim started working for his father 40 years ago, in 1979. Officially, because even as a little boy he was already good with all machines. He remembers the one time his mother came to pick him up from class; he was eight. “Father was working in Tiel and our new operator had helped the backhoe loader into the underworld. It was completely stuck. Me on the back of the Solex with mother to the machine. The engineer laughed at me, but after half an hour of fiddling around I got the machine loose! The driver was fired and the foreman asked me to join him. haha.”

A flight
After Wim joined the company in 1979, a lot changed. In that year, the company moved to its current location on Lindeweg. While working was normal during the day, Wim was busy at night digging the foundation for the new building. Due to the crisis in the early 1980s, almost all staff were fired and Wim, his father Jaap and uncle Arie were left alone. “Fortunately, we quickly got things back in order and after less than a year there were already about ten people around.” Growth took off after Wim and his cousin Hans took over the company in 1997. “During the time of the Betuwelijn, we had 275 machines running. Then I could no longer run on the machines myself. Since that time I take care of the invention and the work; Hans did the workshop and invoiced.” Jelle has been working in the company since 2015. “Actually, that was not the intention at all”, he laughs, “but when I had stopped my HBO education, Dad said: come and work for me in the meantime, so you can think and earn money.” After a month, Jelle ended up on the schedule and he liked it very much. "I like it so much, I don't want to leave."

The first Doosans
Early this year, Biemond's first Doosan was delivered, a Doosan DX300SLR-5 long-reach crawler excavator, complete with automatic greasing system, overpressure unit and GPS preparation. The machine has a boom length of approximately 18 meters and was purchased to replace an older excavator with 20,213 hours on the counter. A second machine followed in early October, a brand new Doosan DX235LCR-5. This tracked excavator, a tail swing, is equipped with an Earthworks GPS system and automatic grease lubrication. And soon a third machine will be delivered, a Doosan DX225LC-5 with mono boom, GPS and overpressure.

Price and service
Why did Biemond choose Doosan? “Very simple”, says Jelle, “the price was interesting and the service good. We were welcomed like royalty at our dealer and received the quote within two days. Parts are shipped directly and are delivered the next day, and our dealer is open on Saturdays. That is practical.” The Doosan's clean, efficient engines also played a part in the decision. “When we register for a work, we have to demonstrate that we are running clean. This is possible with these machines,” adds Jelle. We liked the machines. “A few things are not quite working as they should, but they are being worked on. And the drivers are happy with it.”

'When we register for a work, we have to demonstrate that we are running clean. This is possible with these machines'

Biemond & Zonen grows and shrinks, depending on the projects that are available. “We have always been safe,” Wim concludes. “I buy machines when I have the money; only our passenger cars are leased.” It is still a real family business. In the canteen there is a large photo of the now deceased Arie van Pelt. Wim and Jelle are proud of the fact that they are able to take on jobs that others don't want to burn their fingers on. Their motto: “Flying to the moon is difficult, but anyone can shovel a little soil on Earth.”

Biemond & Sons
In 1957, Jaap Biemond and Arie van Pelt started Biemond en van Pelt BV as a rental company for excavators. Initially, the emphasis was on the rental of equipment for the civil engineering sector. Over time, the supply of materials, the execution of projects under contract, soil remediation and the rental of railway equipment have been added. Our own technical service guarantees a virtually fault-free machine park. In addition to high-quality equipment, the more than sixty permanent employees are well-trained to perform the tasks for which they are deployed professionally and safely. With a rental fleet of about 120 machines and a multitude of attachments, its own depot, its own means of transport and low-loaders and its own workshop, Biemond & Zonen, as the company is called since 2016, is active throughout the Netherlands. 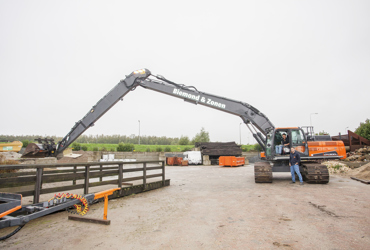 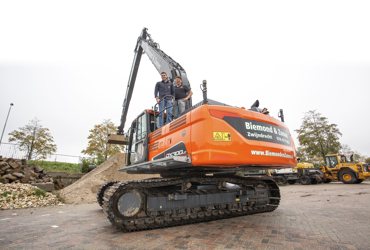 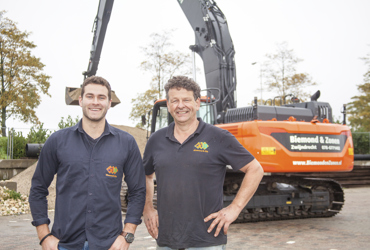