Power woman at its best

We visit Winny Hoffmann and engineer Mari from the company Hoffmann Groep in Beek en Donk, a large organization with about 85 employees. It all started for Winny at a company in Germany that placed system boxes and when her then boss asked if she wanted to set up a company for them in the Netherlands, she did not hesitate. She and her German husband returned to the Netherlands. She started the company in 1980 and in 1986 she took over the entire company. In 1986 the company was only active in trench formwork. However, it didn't take long before Winny started expanding her business. She developed her own machines in collaboration with ABI and Bauer. Various sheet pile profiles have also been developed within her company and the Hoffmann Group had a European patent for this. They are therefore often found in the Benelux and Germany. This year she was named top woman of the year by FRITS magazine. Which in our opinion is more than deserved!

Versatility
''With our company we make earth-retaining structures. We take care of the walls that are placed in the ground. Whether trench formwork, steel sheet piling, Berliner walls or soil mix walls. We make all kinds of retaining walls, after which the contractor comes and works within these walls, for example to build a parking garage or a pit for sewage. The walls then protect the people and the environment. So it's an important piece of safety, says Winny."

The effect
''We are specialized in this and have all these different products in one hand. Of course there are some competitors who can offer a number of systems, but we have created the synergy effect that we wanted to achieve. You can come to us for sheet piling, system crates and soil mix walls, and all of this is also vibration-free.”

winmix
''At the Winmix Cuttersoilmix machines (70 to 80 tons) the Doosan machines are a helping hand. The concrete walls can be 10 meters to 20 meters deep and 0.5 to 1.0 meters thick. The machine that makes these walls has large wheels at the bottom, which grind down and simultaneously mix the soil with a mixture of cement and water. The machine does this until it is at the desired depth and then it slowly rises back up. When the machine goes back up, the excess soil and slurry comes up with it and the Doosan cleans it all up. The machine mills walls of 2.40 meters long and 0.55 meters thick and then to the desired depth. You skip two meters each time so that the wall can harden and the next day the same is done, only for every two meters that you did not do the day before. The ends of the walls that have already been placed are then milled in a bit so that a continuous wall is formed. In parking garages, the CSM walls are often used as a visible wall. You will often see a line running across the walls at the transition between the different slats.”

Assistance
''The Doosan is at the foundation machine so that it can continue to work and everything around it is cleaned up or removed. For example, pre-grooving the route, detouring the dragline bulkheads, moving the steel beams and shoveling away the slurry that comes out of the ground. Besides the fact that we have bought machines from you, so far two, namely a Doosan DX180LC-5 and a Doosan DX225LC-5 , we also regularly rent machines. If this is for a longer period of time, I will buy because it will be more interesting for us."

From well to well
We also spoke to Mari, the operator of the Doosan DX225LC-5 . Mari has been an operator since he was 17 years old, which is now about 40 years in total. Until a year and a half ago he was self-employed, but Winny offered him a job. "I had such a good time with Winny that I said yes to her offer." The Winmix can be found in Essen, Germany on a project where they are going to make the open sewer underground. The client is installing a large sewerage system here. The pipes are drilled from well to well. ''We make the sealing blocks over which they will press the pipes. The blocks we are milling come to a depth of 13 meters. We could go deeper, but that is not necessary for this assignment. We are now on the second phase, phase one started all the way in Oberhausen so we have been working on it for quite some time. Normally we not only make the sealing blocks but also the wells. We usually also place reinforcement in it. This means that steel beams are still being placed in the concrete, says Mari''.

Experience
''I really like the Doosan, it runs very well and is powerful. My Engcon also makes work a lot easier. When I knew I was getting a machine from Winny, I immediately indicated that I really wanted a tiltrotator. Because we are often in tight spaces, it makes everything so much easier. In retrospect, the only thing I might have had to ask for is a hydraulic pump so that it would be even smoother to work when I ask for a lot of pressure. I also have extra counterweight, which comes in handy when, for example, I have to lift a steel beam of 15 meters and have it ready for our large machines. So in short, a super machine that I'm really happy with." 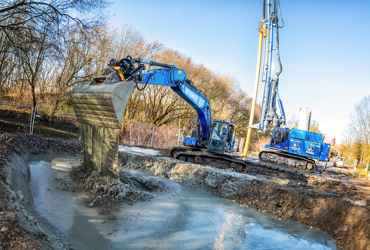 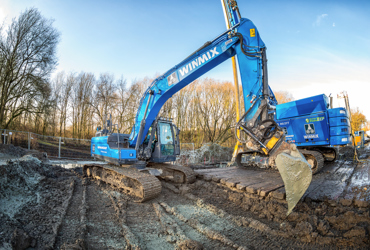 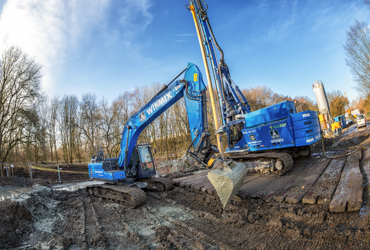 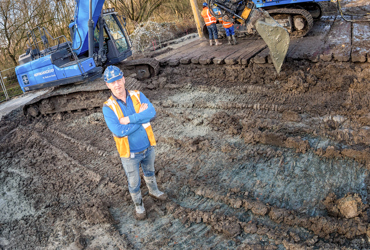 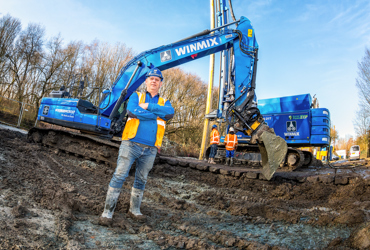 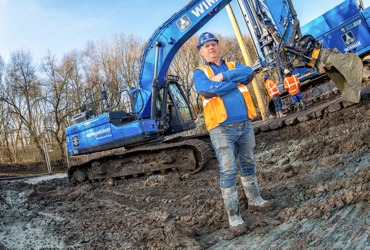 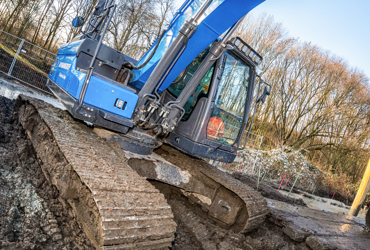 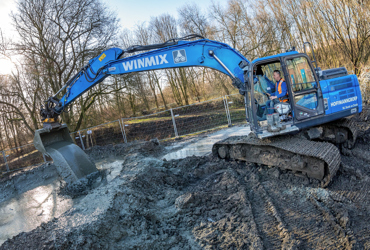 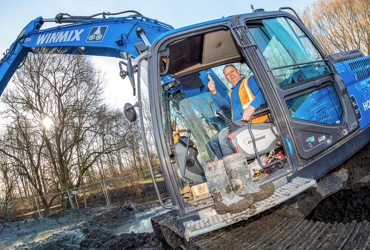 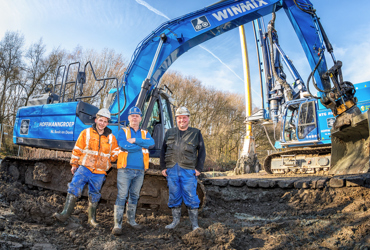 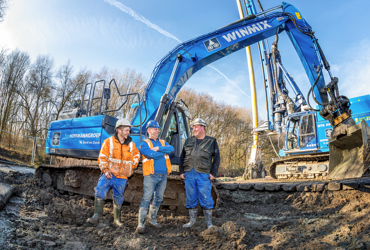 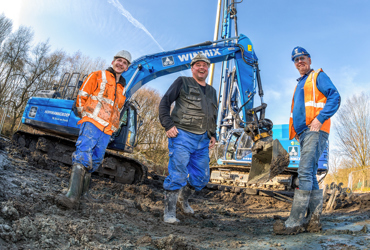 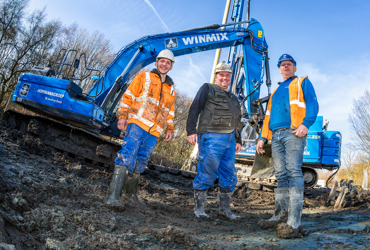 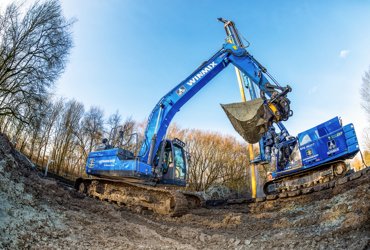 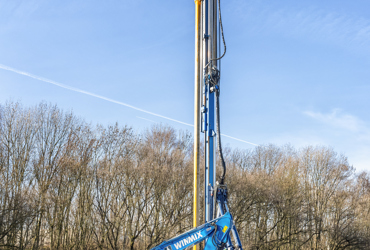 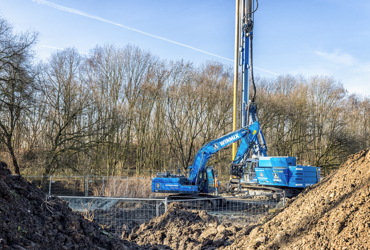 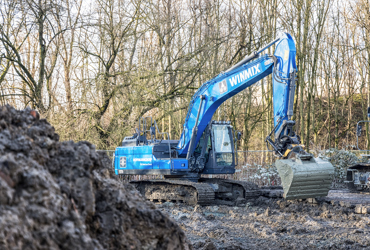 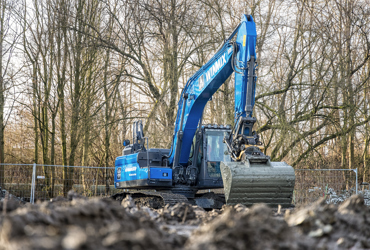 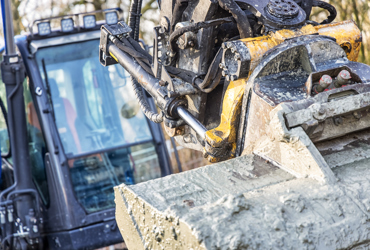 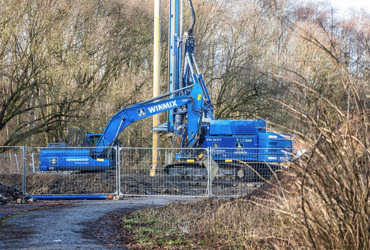 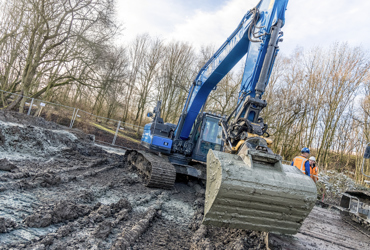 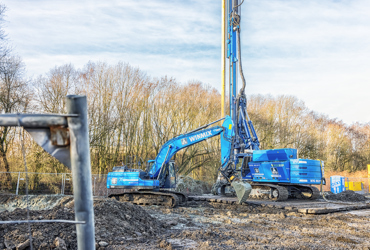 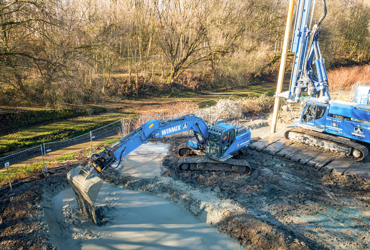 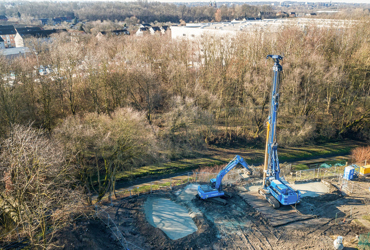 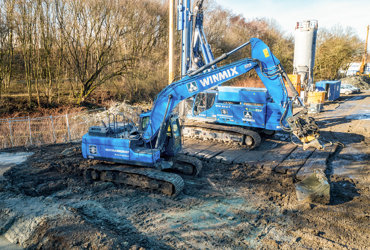 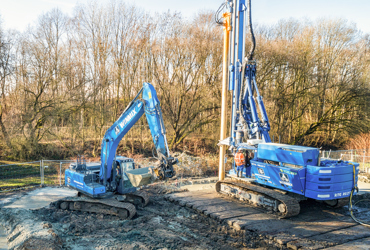