Raaijmakers Sewer Technology: “Your shit is our concern!”

Bas Raaijmakers of Raaijmakers Riooltechniek from Nistelrode started out as an independent contractor in the world of pavers, until six years ago, when he actually rolled into sewer technology by accident. With his Doosan DX10z , he replaces sewers or builds new ones. “My work often leads to innovation and then you just need such a machine!”

Bass begins to speak. “I mainly rely on word of mouth advertising, just like with you. That is how I came to you through Arjan van Gaal of A&R Infra . And in the same way, I am recommended by customers to come and see someone else, for example, for a blockage. I have been a road worker for more than 14 years and a friend of mine, who was in sewer technology, once asked me to come and work for them because that work was much nicer than 'laying bricks'. And indeed after having played there a few times, I never stopped.”

Let's talk about your great slogan: Your shit is our concern!
“Haha, yes I wanted to come up with a nice slogan and I came up with this in one go. I actually have to put him on the bus one more time, but I just can't. It fits perfectly with what I do, right?”

How would you describe the company behind the excavator?
“Yeah your shit our concern, haha. No without madness. My work often leads to innovation and then you just need such an excavator. I had to shovel it for a very long time and often. But that takes time and physical strength. You have to be willing to do that. This is then an ideal outcome. The Doosan DX10z is small, yet big. I can go in a front or back garden and that is the most important to me. I am mainly excavating, replacing or installing a new sewer. Often in a front garden or existing garden and then the excavator comes in perfectly. It is rare that it runs all day because it is opening and closing at the end of the day. Frankly, I like to run on the Doosan DX10Z , so I could do with that a bit more. I'm never alone, so I'm never bored!"

Do you have a goal you want to achieve with your business?
“You mean get bigger? I can't really say I'm out to get bigger. If it comes, then it will come, but if I can continue to do my job as I do now, that's totally fine too. It's super versatile, it's not just shutting off a sewer, but also flushing or a camera inspection. Those cameras aren't the cheapest, but they benefit me so much. I have three different of these cameras, from the very small ones that fit in a shower drain to the bigger ones for thick drains. With this I can detect blockages or map the sewer fairly quickly. And if I have a large building with staff in 10 years' time, I think that's good too, but it just has to come my way.” 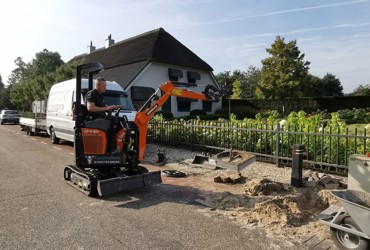 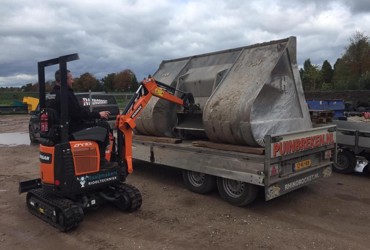 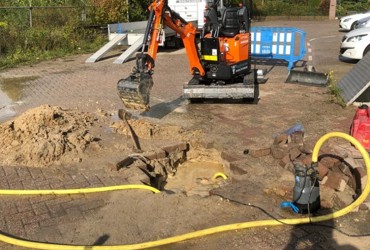