Staad recently delivered a new Doosan DX10Z to Han Hermans Transport en Verhuur. We have an appointment with Han in Drunen where he is chopping the floor in a cowshed. Here comes a new passage for a manure pit. At the time of the appointment, Han has already spent 60 hours on his DX10Z and with a lot of noise from the demolition hammer, Han says: “I only knew Staad from hearing through Arno van den Dungen. Out of curiosity, because I was looking for a new mini digger, I went to have a look in Veghel. I really wanted an excavator with servo control along the seat. When I called Lieke the ball started rolling and here he is. Compared to my previous one, it runs much quieter and it is more comfortable with the levers at the front”.

Han recently bought a tracked dumper and hired someone so that they can take on more and varied projects and thus embark on the adventure together. “The DX10Z is equipped with enough conveniences. It has All Setra, an extra function electric switch to switch off the swing, an extra function on the boom and a pressureless return has been built up for the breaker.”

Of course, we also want to know from Han in addition to talking full of praise about the DX10Z or whether there are points of improvement somewhere in the entire purchase process. “Besides a little miscommunication about getting the DX10Z, I can't think of anything else. That too was eventually resolved. I'm off the shoulders and keep working, I'd rather be 5 steps ahead than 1 behind." 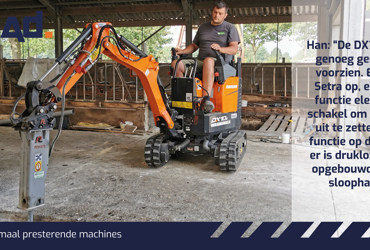 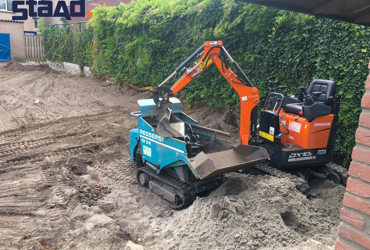