The Doosan is our workhorse

An old-timer in the house style colors is prominently displayed on the lawn at the Gebroeders van Kaathoven earth-moving company in Sint-Oedenrode. Ruud (35) and Bas (33) – the brothers – are proud that they are the third generation to continue the company that Grandpa started in the 1950s.

Gebr. Van Kaathoven is active in demolition works, rubble recycling and earthmoving. The company focuses on large and medium-sized projects in the south of the Netherlands, within a radius of approximately one and a half hours around Meijerijstad. With 20 employees and around it a flexible layer of another 20 employees, and a large machine park, Gebr. Van Kaathoven is able to take care of every project from start to finish. The clientele consists of a fixed group of large to medium-sized clients.

In the 1950s, Doike van Kaathoven in Nijnsel started trading and transporting sand. At that time, Doike was still loading his truck (six cubic meters) with the shovel. But as the company grew, a Jacobsladder (conveyor belt) was soon installed for loading the truck, and several sand trucks were driving shortly afterwards. Son Mathie took over the business in 1985. Because the demand for contractors in ground, road and hydraulic engineering was increasing, he founded Rooise Wegenbouw in 1988. In 2008, the company continued to grow through the acquisition of Gebr. Van de Wiel from Sint-Oedenrode and followed the move to the current location on the Liempdseweg. The third generation is now at the helm.

Challenge
Bas and Ruud van Kaathoven have been working in the company from an early age; they literally and figuratively grew up in it. What started with sweeping the shed during the school holidays became serious business when they became co-owners in 2012. They now do the day-to-day business together and they enjoy it a lot. What could be better than working with a nice team of good employees on a great end result and having satisfied customers? says Ruud. “Moreover, no day is the same and there is a lot of challenge in our work”, adds Bas. Ruud and Bas are well attuned to each other. When the telephone rings during our conversation and Ruud has to leave for a while, Bas picks up the thread without any problems. They take pride in their business and it shows in everything.

From a to Z
Over the years, our activities have expanded further and further,” says Bas. “Grandpa was in fact a sand merchant who also dealt with icing. When our dad took over, contracting was added. And with the acquisition of Gebr. Van de Wiel, a company without successors, expanded the groundwork branch further.” What is the strength of the Van Kaathoven brothers? We can handle all projects, from A to Z, says Bas. When a building has to be demolished, we take care of the demolition, crushing and recycling of the rubble on site so that we can reuse it on site in the new infrastructure. We do the necessary groundwork for the new building, crack bored piles with our pile cracker and then immediately lay the groundwork at the correct height. Later on, the sewerage will be laid and we will provide hardening and planting.

Knowledge
Gebr. Van Kaathoven has an extensive range of machinery, ranging from an 800 kg mini-excavator to a 40-ton crawler excavator with an interchangeable 22-metre demolition boom. This also includes some Doosan machines: a Doosan Solar 5V (tonner) midi excavator, DX140W-5 , DX160W-3 and DX170W wheeled excavators and a DX225LC-5 crawler excavator. The latter was recently taken over from the lease. Ruud: 'We have had good experiences with Doosan for a long time, they are good workhorses.”

Van Kaathoven had been doing business with the Staadegaard family for a long time, and is very pleased with the new Staad. Bas: Since the Staadegaard brothers have moved to Veghel, they have really specialized in earthmoving, so there is a lot of knowledge there.”

Ruud and Bas are pleased with the quality of the Doosan machines, which has been further improved in recent years. “The technology has improved and there is a powerful 6-cylinder engine in the machine, while most other brands still have a 4-cylinder engine. Also important is the low fuel consumption. And the price-quality ratio, which is very good.” Gebr. Van Kaathoven himself. This involves daily maintenance and minor repairs. We've never had any major problems with the Doosans, but if there's anything we'll call and the mechanic will be right here, says Ruud.

Complete
The Doosans are well equipped. A Steelwrist tiltrotator is attached to the DX40W-5, which is mainly used in earthworks and in the construction of sewers and pavements. Most machines have overpressure preparation and the DX225LC-5 is GPS ready. “For large infrastructure projects, we can therefore rent or buy a GPS system if necessary, says Bas. Almost all machines are equipped with a leak pipe, which enables the operator to vibrate Berlin walls in the ground with a hydraulic vibratory hammer, a simple, temporary, inexpensive form of earth retention. In addition, all machines have double-acting extra functions that make it possible to work with, for example, bolt cutters, sorting grab or demolition hammer.

Ready for the future
There are plenty of plans for the future. Ruud and Bas are currently expanding their activities. Part of those plans is to close the old location in Nijnsel, which is still in use for the storage of materials and machines. Preparations for the necessary zoning change have been underway for a long time. The brothers are excited about their plans. We have 10.5 hectares here. land of which we have 3 ha. need for our business. We will set up the rest as nature, with hiking trails, Scottish highlanders and water. To this end, the company will be 'wrapped' in a sloping manner, with a slope and planting, so that it will blend into the landscape and the surrounding area. With this sustainable step, we also want to secure our location for future generations.

Are you now curious about all the other stories from the Groundwork? The latest edition can be found here. 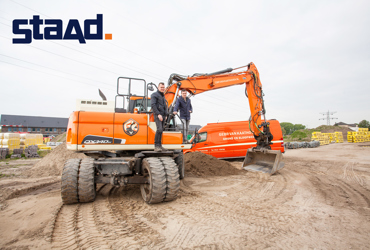 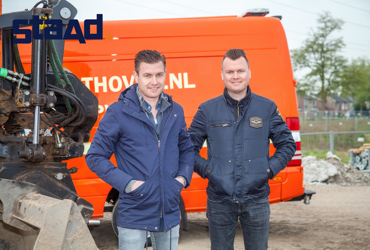 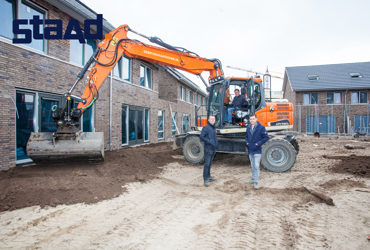