The man and his machine with Johan Swinnen

The man: Johan Swinnen
Johan Swinnen (53) lives and works in Lommel. As the son of a farmer, he trained as a garage owner/repairer. But because he prefers to be outside and work with machines than to tinker with them inside, he has been active as an independent machinist since 1991. It is mainly found on road construction projects in the region. But he also does not turn his hand around for other earthwork and agricultural contract work. Johan has a 9-year-old daughter Karen together with his girlfriend Ingrid. He doesn't have any hobbies, but he can enjoy a day off.

The machine: Doosan DX190W-5 The Doosan DX190W-5 mobile excavator is a productive machine that delivers top performance with low fuel consumption. It can handle the toughest tasks with effective, reliable performance that saves time and money. Thanks to an improved hydraulic system, the engine power is more efficient, for maximum pump flow and more comfortable, smooth and accurate work. The combination of higher digging forces, lifting capacities and traction forces guarantees optimum reliability.

How long have you been inseparable?
“The Doosan was delivered at the end of 2017 and I have already had more than 1,500 hours on it.”

Why did you choose a Doosan?
“My previous two excavators were Daewoos and I was very happy with them. Initially I was looking for a second-hand Doosan excavator in Belgium. But I couldn't get the options here that I wanted on the machine. For example, when I bought my previous machine, I wanted a tiltrotator. They looked as if they heard thunder in Cologne. In the end they put it on and I was the first in Belgium with such an attachment. Then I decided not to buy an excavator in Belgium anymore. I knew Staad in Veghel as a fine family business. You can't distinguish between the workmen and the bosses. Moreover, they think along with you and give good advice.”

What is special about this Doosan?
“It is a complete, well-equipped machine. And that's what they call standard! It is GPS-ready, it has a tiltrotator and it has automatic controls on the joysticks. What a contrast to the excavators of the client I now work for. Compared to my Doosan, they look like they are from before the war.”

What makes this machine different from other machines? “It fits much better in the hand and I have a lot of legroom. If you are six feet and you sit on the machine 12-14 hours a day, you should be able to sit comfortably. Thanks to the adjusting boom and a grab on the tiltrotator, I can really do everything with it.”

Is it easy to use?
"Yes, I think so. It's like cycling. Once you know how to do it, it's easy. A disadvantage is that you have to perform three or four actions before you can start. But then again, those are the safety regulations and that is the same with other machines.”

What about maintenance?
“I used to always do the maintenance myself. Now I have a Staad technician come every 500 hours and watch. That way I know that I am always reliable.”

If you could change anything about the machine, what would it be?
“I thought the option of extending the triple cylinder of the adjusting boom was too expensive, but in retrospect I should have had it done. In the meantime, I have learned to work with it.”

What's the best job you've done?
“There are so many. You can't think of it that crazy or I did it. I once took a piano from a third floor. The best thing is when they say 'that won't work' and I show that it is possible. “

And finally, how would you describe the relationship between you and the machine?
“We are two good buddies. I get in, sit down and just look at the box. What my hands do I do not know; the Doosan does what I want it to do. I am always relaxed.” 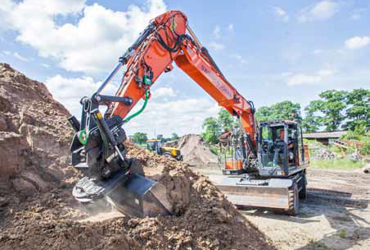 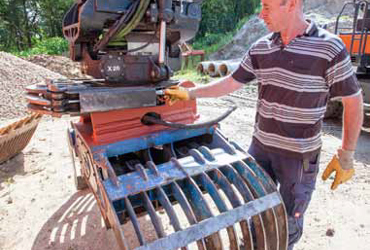