The man and his machine with Mart Wildhagen

The man: Mart Wildhagen
Mart Wildhagen (61) was born and raised in Breda. Mobile excavators have no secrets for him, because he has been working with them since he was 17 years old. He has now also been working for Gebr. Coremans Grondwerken BV in Breda, where he is the permanent operator on a Doosan DX170W-5. Mart is married to Jeanne and together they have two adult children who have already left home. In his spare time he likes to walk and cycle with his wife and they like to grab a drink on the road.

The machine: Doosan DX170W-5
The Doosan DX170W-5 wheel excavator has a powerful, fuel-efficient 6-cylinder engine and the most spacious cab in its class. Reinforced castings, forged steel hinges and reinforced arm and boom make it a reliable machine that can take a beating. Large, robust boom and arm cylinders provide smooth and powerful operation. The machine's enormous capacity is the result of high digging power, high pulling power and high lifting capacity.

How long have you been inseparable?
“This Doosan was delivered in 2017 and I have now run 2,600 hours with it.”

Why did you choose a Doosan?
“My previous excavator was also a Doosan. I was allowed to make a decision about that. I was extremely pleased with it, because it worked very fine. I have 15,000 hours with it and it is still used within the company. We didn't talk about it anymore with this second Doosan, but I'm very happy with it again."

What is special about this Doosan?
It has GPS and an Engcon tiltrotator. This is the first excavator I've had a tiltrotator on and once you get used to it you won't want anything else. It greatly facilitates working with spoons and finishing. I no longer have to get out of the machine so often and the person next to it is also getting better and better; less manual work is required. The climate control in the cabin and the good view from the cabin are also plus points.”

What makes this machine different from other machines?
“The weight distribution is good, which makes the Doosan very stable. I think that's very important. Most machines are a bit heavier on the rear axle, so they tend to sink deeper into a terrain. Because of the tiltrotator, I also have an extra counterweight, which makes it even more stable on its tires. And since I'm not a fan of single tires, double tires look on it. That gives even more stability. As far as I'm concerned, it can't be stable enough."

Is it easy to use?
“Yes, very easy, the levers are light and easy to operate. I've been on excavators all my life and they don't hold many secrets from me. If I sit in the machine for ten minutes, I know how everything works. That is the advantage if you have a lot of experience.”

What about maintenance?
We do all maintenance ourselves at Coremans. I check the oil level, but oil changes are done by our own mechanics. That is a great luxury.

If you could change anything about the machine, what would it be?
“The machine is completely complete. I did put double tool trays under it (left and right) but I suspect they are standard on the latest models. I also had a box welded to the front to be able to store my chains. That is also easy for the ground workers, who can easily reach it.”

What's the best job you've done?
I prefer to finish something completely. And I like the variety that you have with a wheeled excavator, but not with a crawler excavator. I am currently working on a new gas station in Tilburg: adding material, finishing rubble paths, excavating wells, levelling, you name it.

Can you live without the Doosan?
Well, that's to be hoped. I'm happy with my Doosan, but I also like to be free and at home.

And finally, how would you describe the relationship between you and the machine?
“It's just good. I have a really good wife, so I'm not thinking about trading her in for a Doosan. But I feel like working with the Doosan every day.”

Are you now curious about all the other stories from the Groundwork? The latest edition can be found here. 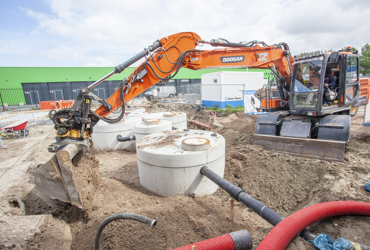 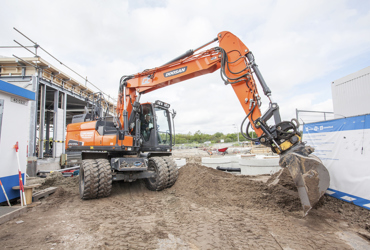 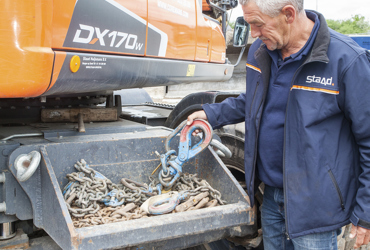 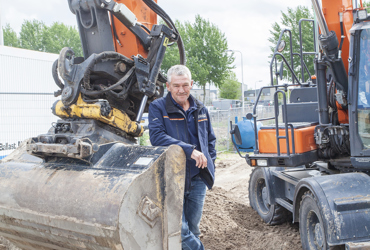