We visit operator Gert to talk about his experiences with the Doosan DX165W Electric . At the moment he is shooting in the center of Zwolle where they are doing the conditioning work, before they are going to make the dikes heavier over time. Last week he already worked the necessary hours to see how the mobile excavator performs. Gert is 39 years old and started working as a machinist when he was sixteen. He has the necessary experience with this and is therefore a suitable operator to test the Doosan DX165W Electric for us.

No more diesel
'To be honest I thought; Do I really have to get on that electric excavator? Let me sit on a diesel. But I really don't mind at all. I must admit that. In fact, it is a very nice machine that sometimes even runs better than a diesel. The only thing I didn't expect that could be further developed is the sound. When you are outside it is not that bad, but in the cabin it needs to be insulated even better, it is now whizzing in the cabin. But the machine picks up very quickly and runs well. You are really going in the right direction, says Gert.”

Battery capacity and charging
“At the moment I can do almost two days with it, but we are not fully shoveling. I can imagine when you are really shoveling all day that the battery would be empty a bit faster. I notice when I have to drive a lot from job to job that the battery also runs out a little faster. But then I would still be able to run with it for a day, I expect. At the end of my workday, I just plug it in and it charges. Super easy, just like you charge a Tesla on a fast charger, I do the same with the Doosan DX165W Electric . It really takes less time than refueling because now it's just plugging in and I can go home. You just have to keep an eye on the meter on the way from job to job, because with a diesel you throw in a can of diesel and you can continue again, for electricity that is a bit more difficult. So you have to take that into account where a charging point is."

Power as it should be
''The machine really does what you would expect from a wheeled excavator. The power is nothing less than a diesel. It takes some getting used to and feeling for me. It just runs really well. I would like to name more points but I can't think of it. It is the first prototype that I understand you are developing further, but this is really very promising. The switch from diesel to electric is really not as annoying as I thought in advance." 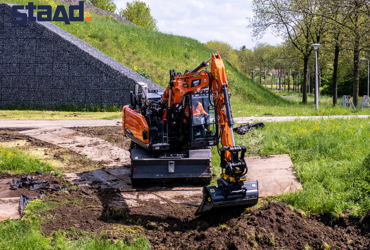 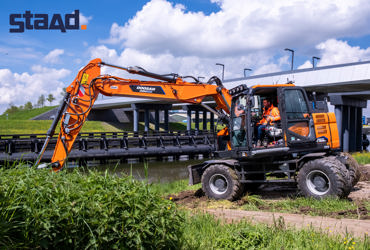 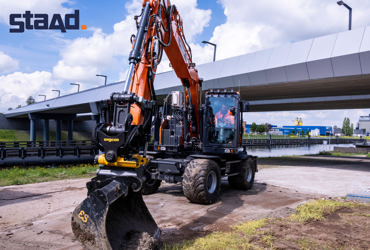 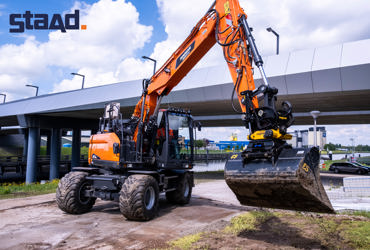 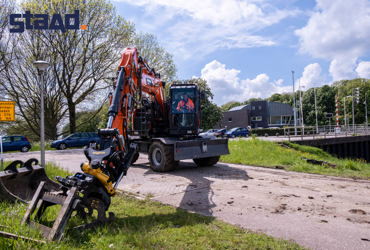