Hydrozine is another word for Formic acid. Formic acid is a product that has been around for a long time, but has recently been in the news often because it is an ideal basis for generating hydrogen and therefore electricity. The company DENS is working on this application which has great potential for the upcoming energy transition.

Formic acid can be obtained in different ways. What it takes: water, CO2 and electricity. The CO2 that has already been emitted can be collected. By using electricity from a green energy source such as windmills or solar energy, only water is needed to make hydrozine. In this way we turn our own emissions into a new zero-emission fuel. It sounds simple, but something still needs to be done to make this all run in a circle.

Logistics possible
The main obstacle in the production and transport of hydrogen and formic acid are the logistical challenges. We ask Max from DENS for his opinion on these developments. “Formic acid is still a fuel that is not easily available. We are busy making an inventory of which companies have already come a long way in this development of formic acid and how we can obtain the fuel in a simple way, says Max.” Refueling formic acid at a filling station is not yet possible, but . DENS has developed a battery on formic acid. This technology brings you one step closer to a zero-emission construction site. It will take some time before it is attractively profitable for the market to purchase an excavator that will run on formic acid. Dens talks about a period of five years in which it will be interesting for customers to convert her excavator to drive on formic acid.

Aggregate on hydrozine
Dens has developed an aggregate on hydrozine. Hydrozine, also called formic acid, is a liquid substance that is able to supply energy without emissions by means of a hydrozine aggregate. The generator uses the liquid hydrogen carrier hydrozine, which as a liquid, unlike hydrogen, does not require pressurized tanks. The substance itself contains 53 grams of hydrogen per liter, which allows it to safely store and move large amounts of hydrogen. In the generator, hydrogen is immediately generated from the hydrozine and immediately converted into clean electrical energy in a fuel cell. Due to this effect, the generator remains as user-friendly as the traditional diesel generator.

Further development
We want to ensure that the customer can easily convert his or her current excavator to a new fuel. For example, in an electric excavator, one battery could be replaced by a hydrozine aggregate. But there are still a few things that need to be done before we get to that stage of development, says Max. 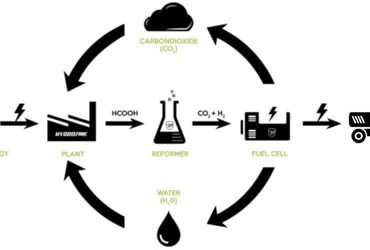