At Matthias Blomme it was poured in with the spoon

Poured in with the spoon
We visit Matthias Blomme, 21 years old and not only an operator but also an entrepreneur. You don't see this combination very often. Being able to buy a young used Doosan DX300LC-5 myself at such a young age. With this said, it's already an impressive story. Matthias works hard with his father on the family business Dranicon, where Matthias arranges the earthmoving branch. Matthias' father has been working with agriculture and earth-moving machines all his life. Matthias This comes at a young age in contact with it and then get for his 10th birthday his first mini digger to learn the tricks of the trade in the backyard of his parents.

Learned young is done old
We cannot call Matthias Blomme old. From the age of 4, he learned the operations at home with his father's 40-ton excavator. That's how he learned to level up. He did this by putting down a ball and pulling it towards him. This started with a big ball and eventually it became such a small ball that it came to perfection. The mini digger him for his 10th birthday had he exercised over further and did some chores at home and in the neighborhood. With this in mind, you can imagine what kind of engineer Matthias is. A secure operator who also knows what is involved in a project. Approach the customers with respect and tidiness and ensure that the work is always done down to the last detail.

Passion
Matthias has been working with machines from an early age and the bigger the excavators, the better. He was therefore sure that there would be a crawler excavator one day. It was almost time! Going for his 21 th birthday Matthias and his father on the road together. Looking for his dream machine, preferably as large as possible. They quickly arrived at our dealer. ''Our dealer had a Doosan DX300LC-5 and a Doosan DX340LC-5 both used young. I tried both of these in the sandbox at our dealer and I quickly found out that the Doosan DX300LC-5 suited me. When I asked if I could try it out from the rental first to make sure this was the machine, it was no problem. After a few weeks of trying out, I was out and the representative, Johan Zijlmans, came by to finalize the sale." His birthday is central when it comes to buying a new excavator. But to be honest, there is no better gift to give to yourself.

powerhouse
When asked why a 30 tonne excavator and why a Doosan? Mathias knows how to answer quickly. “There was an increasing demand for large crawler excavators in Belgium. Where this has been the case in the Netherlands for years, Belgium follows a little later. I like to be at the forefront of new trends and developments, so I also like to respond to this. So in addition to always wanting a large crawler excavator, it was also the demand from the market that made me decide that now was the right time. It soon became clear to me that it would be a Doosan. My father bought a Doosan DX255LC in 2008 . My father was very satisfied with this machine. It was a strong and economical machine. The reasons why I have chosen a Doosan is first of all for the fuel consumption. I believe that Doosan is really economical and the machine also listens very well. Not only is it a careful excavator, but it's also quick to respond, finishes perfectly and delivers plenty of power when you need it. For example, a few weeks ago I installed ten 20,000 liter wells and my Doosan DX300LC-5 does it effortlessly. The excavator is also prepared with the Trimble GPS system, so that I can also run on GPS for the customers. So for me, this excavator has everything. In addition to the above points, I must not forget the view, which is so optimal. I work with many colleagues at work so I need to have a good view at all times. Other brands have a counterweight that is more in your view or the design that blocks your view on your right. Visibility is so important in our business and Doosan certainly came out the best in that."

Complete picture
''I came in at our dealer and that was right right away. Being welcomed at the reception immediately gave me the warm feeling. The representative gave us an extensive tour of the company and an explanation of the service to the workshop, but also about the different types. Until now, I once had a malfunction with my Adblue and then I called the guys from our dealer and they immediately helped me over the phone. That was very nice, also because the instructional videos that I received via the app helped with that. This way I don't have to incur costs when it's not necessary. In addition, I have the machine maintained by our dealer. I think it is important that it is done in a good way. There have been several mechanics here, but each one of them professionals, I am very satisfied with that. ''

finishing touch
In a few years Matthias would like to have a Semi Long Reach. In Belgium, the demand for Semi Long Reach excavators is starting to rise, so he might rebuild his DX300LC-5 and extend the boom or keep it that way and buy an additional Semi Long Reach. So that his work becomes even more specialized. 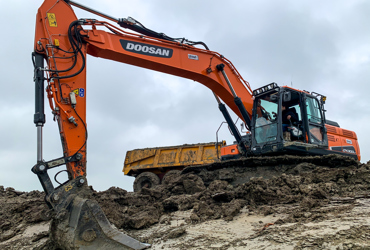 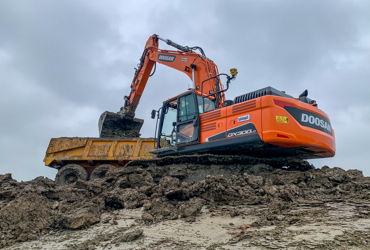 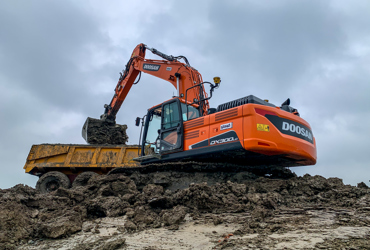 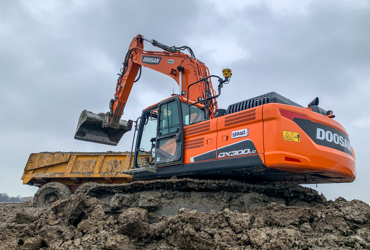 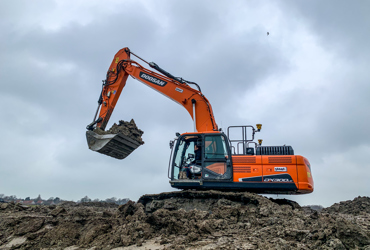 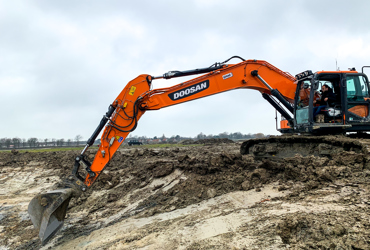 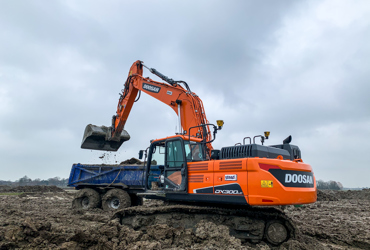 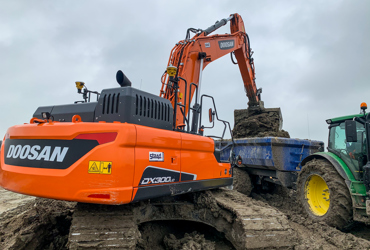 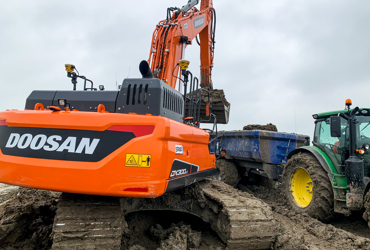 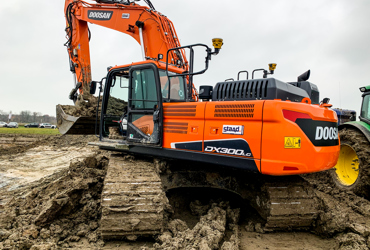 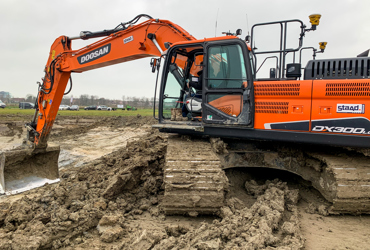 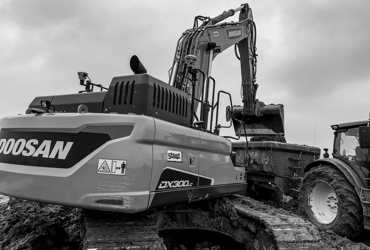 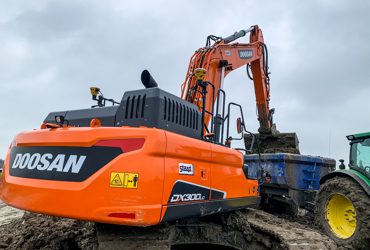 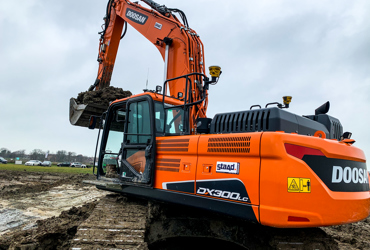 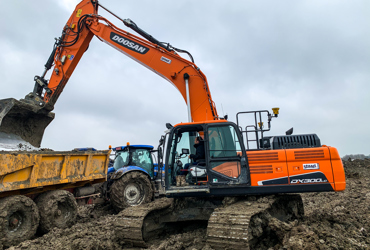 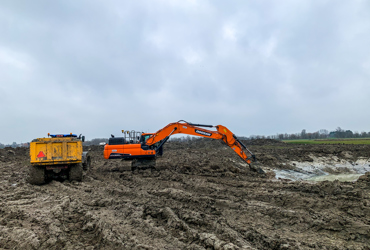 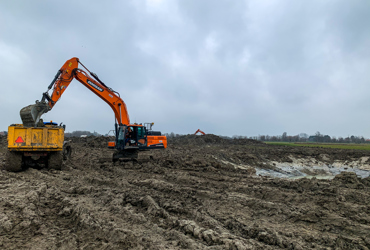 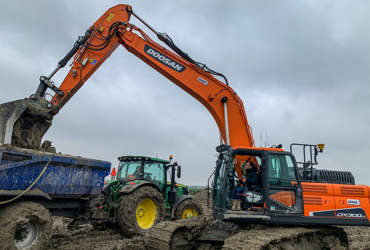 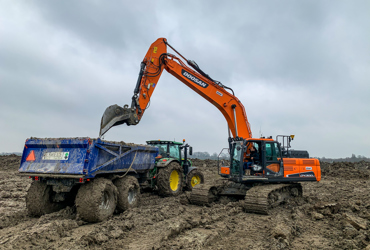 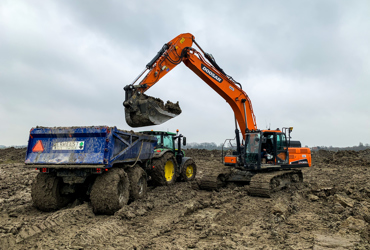 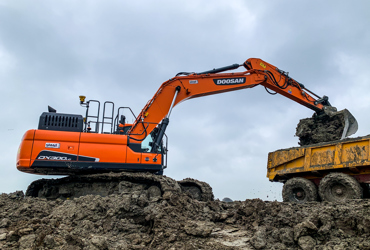 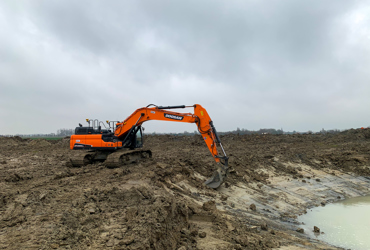 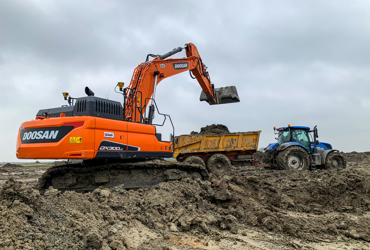 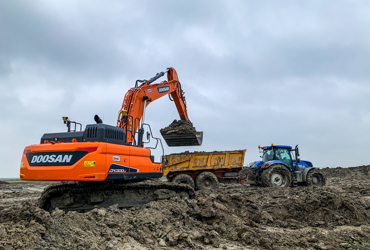 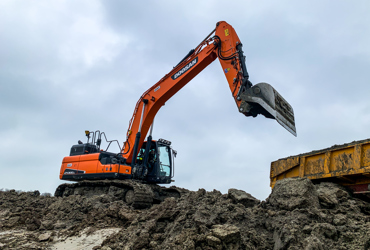 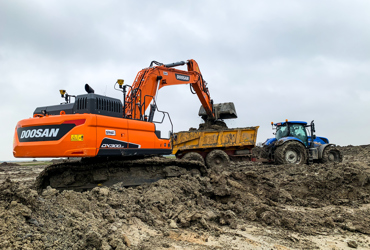 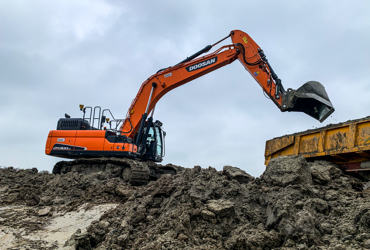