The workhorses of Earthworks Dierckx

We speak to him after working hours at his home in Kasterlee. Partner Dorien Campforts also joins. Jeroen Dierckx (36) has just returned from a busy day at work. As the owner of Grondwerken Dierckx, he is passionate about earthworks and excavators. Not surprising, when you consider that as a young boy he was fascinated by the machines his father worked with in road construction.

My father was a road worker and drove a wheel loader. On my days off, I could always be found in the cab with him,” says Jeroen. The choice for training to become a construction site operator in Geel was an obvious one. Here Jeroen learned to work with excavators and road construction machines. After school he started working as a machinist, until he took the step in 2011 to start his own business. He was 27 at the time.

“After some years of experience, I decided that I could actually do the work I did for a boss better for myself,” says Jeroen. “I already took care of the excavator as if it were my own. In addition, I had all the papers needed to start a business. I only had to

buy and start your own excavator.” Based on a sound financial plan – “Fortunately, I am quite well versed in that.” – Jeroen received a loan from the bank. His first excavator was a brand new Doosan DX140W crawler excavator. He bought it at Staadegaard in Lieshout. The reason? “Five year warranty. With that I was sure that I would not incur large costs on the machine in the first big years. A bit of operational security, so to speak.” Jeroen had never worked with a Doosan before. “Acquaintances were surprised when I came up with the Doosan, because they expected me to choose a different brand. But I had also heard good things about the Doosan.” Jeroen's company is located next to his parental home. Jeroen was able to work in road construction right from the start. This activity was then (and still is) his main income. In addition, he came to private customers through word of mouth, by whom he is engaged to construct a driveway, a swimming pool or a garden. He still enjoys this work to this day, usually in the evenings or on Saturdays.

Meanwhile, Jeroen no longer works alone, but employs three drivers. “It started in 2014 with a neighbor across the street who left school. I knew he had good hands on his hands and the right mentality to become a machinist. I trained him completely myself.” The other two drivers joined later, the last one in 2017. Jeroen does the administrative work himself and he doesn't find that a problem at all.

The machine park has also grown with the company. At present, Grondwerken Dierckx has four wheeled excavators – one for each operator –, two midi diggers, a wheel loader, a tractor with a cart for container systems and some other 'small stuff'. Three of the four excavators are Doosans. The DX140W from 2011 is still running and now has 18,000 operating hours on the counter. Jeroen bought the Doosan DX140W from 2012 with 8,500 operating hours second-hand in 2016. The latest addition is a Doosan DX140W, which he bought new in 2017 and which has been used for 3,000 hours. One of the midi diggers is also a Doosan.

All three DX140W machines are equipped with a tiltrotator. “The work we do in road construction, a lot of finishing work and excavating footpaths, for example, cannot be done without a tiltrotator. And also let's put a button on the joystick by default with which we can switch on the stabilizers. Normally you have to press the brake pedal and press a button on the right side. We have found that it is nice to be able to switch on the stabilizers without clicking the brake pedal. And Staad did that so well on our first machine that we now have it as standard on all our excavators.”

Jeroen praises the stability, economy and strength of his Doosans. “The wheelbase of the Doosan is slightly longer and it is several centimeters wider. The counterweight also sticks out a bit more. If you have limited work space, that can be a disadvantage, but it provides more stability. I'm happy with it." Travel time The fact that the last excavators are from Doosan again is because Jeroen is simply satisfied with them. “Not just about the excavators themselves, but also about Staad's service. We do our 500-hour service ourselves, but every 1,000 hours we have a Staad technician look at it. That way you limit unexpected costs.” Jeroen thinks the distance Veghel – Kasterlee is a disadvantage. “We often work beyond Antwerp. If a mechanic were needed, he would have lost a lot of time before he got here. Fortunately, that has not been necessary so often.” Jeroen inherited the love for machines from his father. He takes good care of it. “The machines are usually on the customer's site. Only during the holidays do they all come home for a good cleaning and maintenance. After all, they generate our income, so we have to take good care of that.”

Earthworks Dierckx in Kasterlee specializes in all types of earthworks, from small works in hard-to-reach places and the supply and removal of soil to road works, leveling works, the construction of sewers and the construction of embankments. The company also rents out excavators with or without an operator. Groundworks Dierckx invests in high-quality machinery for flexible deployment and a fast, complete service. The company strives for quality craftsmanship, so that a good result can always be delivered. Dierckx's customers are mainly located in the Kempen. 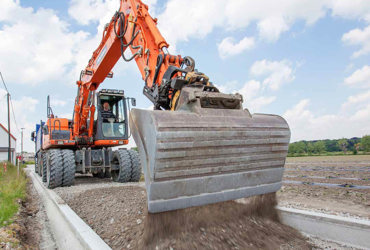 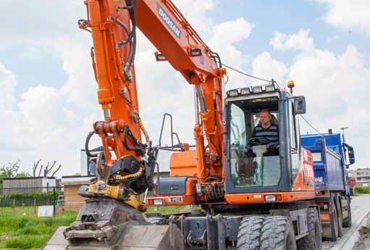