Due to our suddenly strong urge to reduce (nitrogen) emissions, the demand for electric construction machines here is growing faster than the pace at which large manufacturers develop them. So local players themselves are converting machines from diesel to electric. Doosan dealer Staad is sticking his neck out with the Doosan DX300LC Electric . The first 30-ton crawler excavator that works completely electrically and gets its power from battery packs. No diesel tank, no engine, no emissions. The Netherlands is way ahead of the pack when it comes to emission-limiting measures in construction. So there is a demand for clean, sometimes electrical, machines. This is already there due to increasingly strict requirements regarding, in particular, nitrogen emissions from construction projects. The expectation among dealers is that the demand for electric will increase again now that the government wants to set up a subsidy scheme for it.

Global Markets
Local dealers see that demand. However, the major manufacturers are dealing with global markets, and every market has something going on, and they have their hands full converting the diesel machines from Stage IV to Stage V emission standards. Doosan DX300LC Electric a special machine At the same time they do work behind the scenes on electrical machines, but they do not make extra haste for our small stamp country. After all, worldwide demand is still very small, and this kind of development process takes a certain time for large companies. The focus here is often on compact equipment. In that respect, this Doosan DX300LC Electric is a very special machine. Never before has such a heavy 30 tonne crawler excavator been made electrically.

The development of this Doosan DX300LC Electric underlines once again that smaller companies can respond very quickly to changes in the market. And that, as we saw before, Dutch entrepreneurs are not afraid to actually do that, even if the necessary investments are serious. Doosan dealer Staad saw opportunities for electrical machines two years ago.

More demand for electrical machines
At the end of last year, three important puzzle pieces came together. 1) Staad noticed from customers that the demand for electrical machines was increasing rapidly. 2) A converter had been found that was deemed suitable for electrification together and 3) a potential buyer applied for the first machine. Not to be secretive; the convertor became Urban Mobility Systems (UMS) in Oss, the customer is contractor Ploegam in Oss. Both companies are located near the Staad home base in Veghel.

Stripping and expanding
At the beginning of 2020, the Doosan DX300LC was delivered new from the factory, as a complete machine with a diesel engine. While they started stripping and removing the engine block in the workshop in Veghel, Oss developed a coordinated set consisting of battery packs, an electric motor, chargers, wiring harness and software. Staad engineers reassembled everything into the working electrical machine as it stands in our test sandbox today.

Full assistance from Doosan
Remarkable; the dealer received full assistance from Doosan, who made certain drawings and diagrams available in confidence and also supplied partial certificates for the CE-approval of the machine. You can tell by the machine; not only is the Doosan brand name still on it, the controls have also been incorporated into the original 8-inch screen. You will soon be able to see the current power consumption and read how full the battery is. This is only possible if there is permission to intervene on the original software and wiring harness. Not all manufacturers cooperate with this. Presumably Staad had a good plan in which Doosan went along, at least it seems that if you look at the result.

Thoughtful concept
Because although you can still see from the details that the DX300LC Electric is a prototype, the concept as a whole seems well thought out. When the machine is cold, a slight vibration noise occurs somewhere, according to Staad this has now been resolved. At temperature, the noise also disappeared during the test and the machine is really pleasantly quiet. The machine runs and reacts like a diesel, only in the power plus position is the machine brighter and therefore quicker to operate than the diesel version. The entire control system has been developed to keep the character the same and that has largely been successful. That is also in the details, for example, the speed of the electric motor drops slightly when you put a heavy load on the machine. That would also do a diesel engine and is so tuned for this electric version. If you don't use the joysticks, the speed drops to idle, after an adjustable time the machine switches off completely. It's amazing how everything has remained the same for the driver, you still turn the ignition key and go to work.

Less maintenance
In daily work there are no extra things that you have to pay attention to. Not even in maintenance; rather less. Because checking the engine oil, cleaning the air filter, refueling diesel and adblue; it all expires. The only thing necessary is to charge the machine in time. When the batteries are almost empty, the machine reduces the power in time, then you can still crawl back to your charging point and thanks to this built-in protection, the cooling and control keep enough power to continue functioning.

Interchangeable battery packs
Staad opts for modular and interchangeable battery packs. These use Lithium Iron Phosphate technology (LFP) and weigh 1,200 kilograms each. Such a battery is built in a solid-looking all-steel and welded housing with lifting eyes. One battery pack provides 130 kWh of power and works with a voltage of 650 Volts. Space is reserved for a maximum of three packages next to each other, which you place at the back of the superstructure, against the counterweight. This remained practically original, only a thin edge has been milled off to gain space for the packs.

80,000 euros per battery pack
With the mentioned battery capacity, it is likely that you can complete an average working day. The downside is that these battery packs are the most expensive part of the entire machine. A long working life therefore comes together with a substantial investment, count on roughly 80,000 euros per battery pack. Not every 30-tonner spends all day shoveling next to a rubble crusher or long days at a pulverizer. Market research by Staad shows that on a normal working day, machines in this class run on average for just over six hours a day, of which another 30 percent is stationary. That is why the Doosan can also run on one or two batteries, in lighter work that may be sufficient and you limit the investment sum considerably.

Rent battery packs
They are also working on a possibility to rent battery packs. The high purchase costs are offset by lower operating costs. If you now burn more than 20 euros of diesel per hour, you will not lose more than 5 euros per hour for electricity. These lower running costs cannot make up for the high purchase price, electrical work is simply more expensive than diesel. This is possible thanks to subsidy schemes.

A full day with two battery packs
Our test machine is equipped with two working and charged battery packs and a dummy filled with ballast; to avoid doubt; it was actually disconnected from the system during the test. After doing the loading tests, digging trenches, putting some sand in the depot and leveling everything again, that adds up to about an hour of mixed work, alternating between maximum production, quieter running, driving and smoothing, the Doosan had about 15 percent of its battery power.

3,000 charge cycles
If you continue this, you could easily make a day with the two battery packs. These are covered by a 5 year manufacturer's warranty. Technically, they should last 3,000 charge cycles, which equates to 10 years. After that, they can still operate, but no longer deliver the maximum specified capacity. Charging one battery takes 3 hours with the built-in fast charger on a 63A connection. Loading three packages then takes 9 hours, which is still fine at night. That heavy connection is an important requirement, with a lighter 32A connection, charging takes twice as long. You could just charge two batteries overnight. Thanks to the interchangeable packages, the machine does not have to stand still much. In fact, it should be almost or completely possible to run continuously 24 hours a day with 3 packs, by always having one or two full batteries on the machine and the other on the charger.

Change battery
Then you have to change the battery regularly, that is fast in itself. Connecting or disconnecting comes down to inserting a plug and a signal cable. With chains you can lift a battery out of the holder in no time. An important requirement in the whole story is that you have a heavy current connection to the High system voltage Staad chooses a high system voltage, so that results in a low current (Amperage), the cabling can therefore remain relatively thin. The batteries power a water-cooled 145 kW electric motor that delivers 1,250 Nm of torque. This is located on the right front, also the original pumps have been moved here and flanged to the engine. In eco mode, the engine runs at 1,400 rpm, maximum is 1,800 rpm. The coolers for hydraulics and system are now electrically powered, as are the heater motor and air conditioning pump. Newly written software controls the entire control between motor and hydraulic pump and in fact the operation of the entire machine. During the test, the software sometimes crashed, after which the machine came to a standstill and a reset was necessary. In this case, the supplier was able to read the machine remotely and solve the problem. That can and may still happen with a prototype with less than 100 hours on the clock.

Doosan DX300LC Electric very productive
In terms of productivity, the machine is doing fine; that the electric motor on paper has less power than the original six-cylinder diesel engine, you don't notice that in practice. It can easily compete with the average diesel competitors in this class. No operator running this machine will doubt it. The machine is slightly less productive in our measurements than the Doosan DX300LC-7 we tested earlier this year, in the same location, conditions and with the same test operator. The difference is not in the power of the machine, but can be explained by the fact that the diesel version was equipped with an oversized 2,400 liter box, the electric one with a more common 1,915 liter box. This electric version is also 2 tons heavier than the diesel version, which means that the measured production, which we express in tons and cubic meters per tonne of machine weight, is automatically lower.

Concept inspires confidence
The Doosan DX300LC Electric is a machine with which Staad sticks his neck out. Apart from some small details, the concept inspires confidence. For all-round work, the machine has sufficient manpower and the battery capacity is sufficient. Even in heavy work, the machine is not inferior to the average diesel machine that we have tested in the past, and you can change the batteries if you want to work long days next to the rubble crusher. The fate of this machine rests mainly in the hands of the market, legislation, subsidies and requirements. Then it will become clear whether the purchase price of 545,000 euros can be calculated. If it's up to Staad, electrical work in this heavy class is no longer a thing of the future, buying now means running in four months.

The entire article was written by Construction Machines 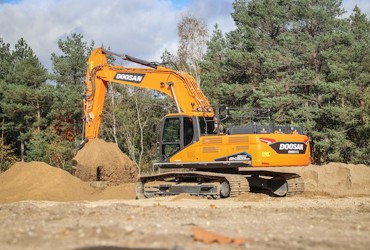 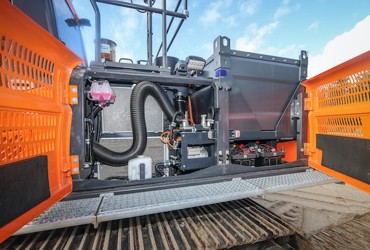 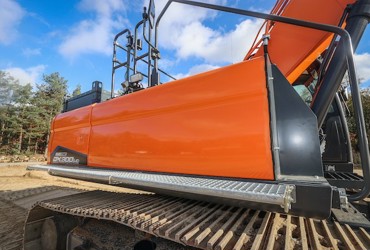 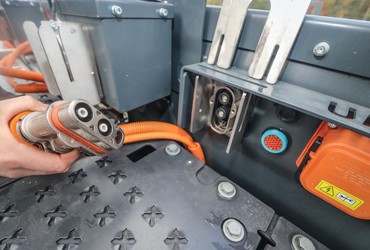 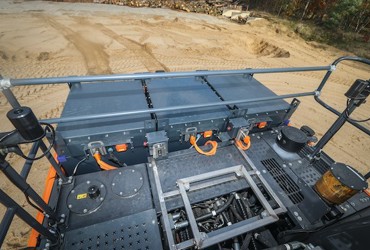 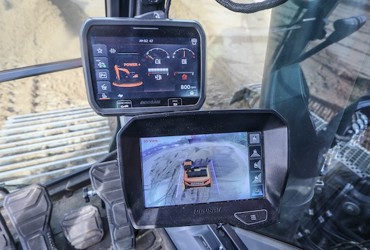 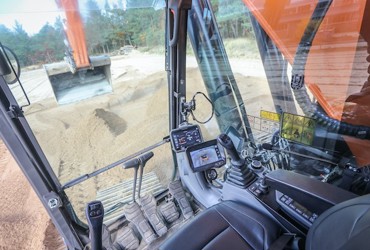 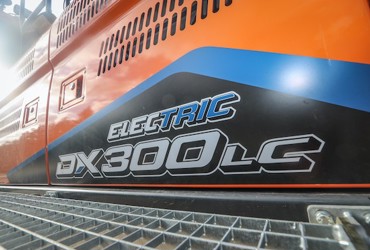